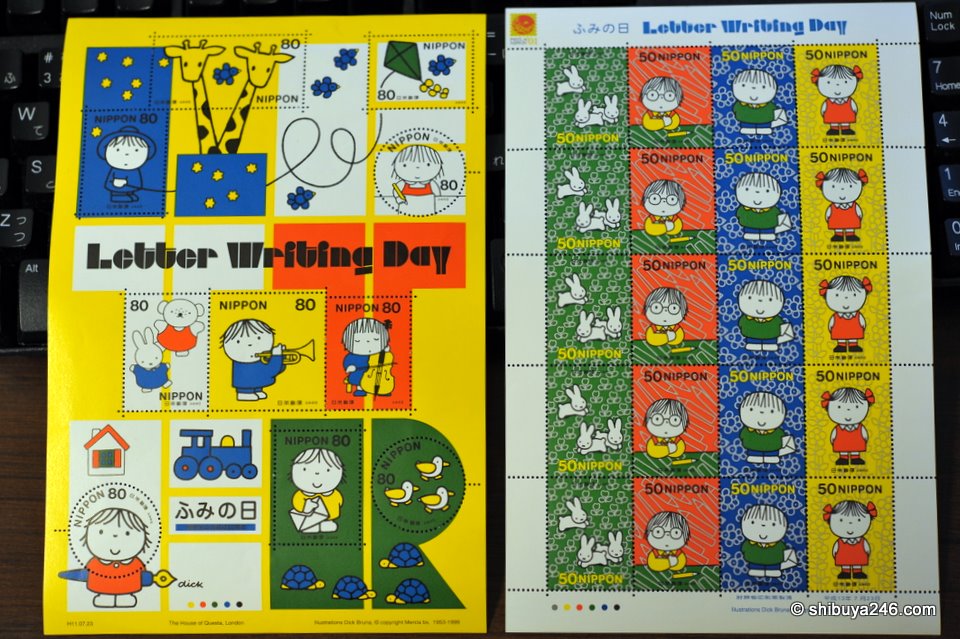 I bought these stamps of Rakuten, Japan’s online auction site. Dick Bruna’s work, particularly with the Miffy character, are still very popular in Japan. Japan Post often puts out commemorative stamps with opular characters on them. Doraemon is a regular.

I bought the stamps because I liked the look of them, but when they arrived it was a reminder to me of the real purpose of stamps, to send letters, and how that system of communication has changed a lot over the last 10 years.

Recently I have been using twitter more than email. I thought back to about 10 years ago when I stopped sending surface (snail) mail and was mainly using email. At some point the balance changes and the new system becomes more widely used than the old one. With Google Wave coming out soon also, what will we call this new form of communication, for tweeting and wave creating, now loosely referred to as “micro-blogging”?

The term blog originally came from “web log”, a log of activities for the web, similar to the Captains Log on a ship. The “micro-blogging” name, therefore, sounds as if we are leaving a log of something for others to read later, but in general, many of the tweets sent out have a short shelf-life beyond which they lack relevance or entertainment value. Are tweets and wave communications more similar to a direct messaging platform than they are to a blog? Does having the ability to search through archives of tweets really help us, or do we really want to see just the most recent time-lines, like trending topics?

I am not sure the “micro-blogging” term is the right one and wonder what new word people might suggest for this type of communication which is growing and developing rapidly. When Google Wave launches we can expect more of this short form communication and with 2 competing platforms it will be interesting to see who can dominate or whether we can find a way to use both services in a cooperative way.

What are your views on Tweeting v. Blogging? Twitter v. Google Wave? Sending mail through the post office v. Email?

If we can send “DM”, direct mail on platforms like Wave and Twitter, and those services are provided to look more like an email platform, do you think people will stop using email?

Have only been blogging for a year now and using Twitter for well, only a week, Twitter seems handy to make a short micropost that would not warrant a full blog post, but their shelf life is indeed limited.

(I need to start putting my comments in Notepad first… darn Enter key.)

no problems. I cleaned that up. I like your avatar by the way. very cool 🙂

Wave for me it’s just a better way to use email with the possibility to bring Blog and Twitter.
There are few problem or plug-ins missing for now but that should work very well.
And if they bring the possibility to send regular mail it will sure kill after a while the e-mail we know.
What people mainly like from mailing possibility from Twitter, Facebook or others is the spanm-free feeling

spam is definitely a big problem that email finally got on top of, but couldnt totally solve. Let’s see what Google Wave, Twitter end up doing. Currently Twitter’s DM system is all but unusable.

Ah Dick Bruna,a fellow Dutch man. In my country well known for his childrens book and unique style.
One of his other popular characters is “Nijntje” (Nijn = childish/ short for Konijn or rabbit. “Je” is the property to make something smaller I.E Nijntje = Usagi-chan translated to Japanese ) I think that one could really hit it in Japan if it hasn’t already seeing the hello kitty craze that still exists over there 🙂

On the subject of Twitter; I use it primarily as both an RSS replacement. I.E I follow people who tweet updates to their blogs/sites etc. (Such as yourself) – and with the emergence of flat free 3G / wireless internet, Twitter has also replaced regular SMS TXT messaging for me (Which costs 10 cents a piece as opposed to the free flat-rate internet) so for example after work I might tweet: going to have okonomiyaki at the japanese pancakeworld; and my RL friends can read that and also appear there and vice versa. So those two things is what I use twitter for mainly and it works great.

Google wave, I only have it for the last few weeks; I haven’t really played around with it yet. WIll make some time for it this weekend but so far it seems promising enough a tool to organize things. If it replaces e-mail ? In this form ? no . It’s not that intiuative to use yet and offcourse e-mail you can use to send automated forms, or large documents etc. that you just cant yet with wave.
Not to mention; that E-mail clients are *VERY*mature these days with many functions/automated processes etc. etc. that wave just lacks. But give it a few years 🙂

Wave looks to be bound to the browser right now. Once Twitter became available through TweetDeck and other UI’s, a lot more people started to use it more regularly. I would like to see the Browser itself become the main computer display UI and then be able to launch things straight off that, without opening a browser. I think that is what Google Chrome are trying to do down the line. Adobe Air seems to be tackling that from the other end of the tunnel, taking net applications out of the browser and into different UI products. Wonder where these two points will meet?

To clarify the above, the character Miffy is actually Nijntje, the names are just different in dutch / japanese. His style is timeless, there have been quite a few generations brought up with Dick Bruna characters.

I think e-mail will be around for a while, Twitter is by no means a substitute for the amount of data you can send using e-mail. Wave perhaps, in a few years time. It’s too soon to tell.

RT @Shibuya246: Japanese Postage Stamps, Japan Single Photo | Shibuya246 http://bt.io/BKYr
Snail mail vs E-mail I still enjoy the old fashion way, kinda sorta like a catalog in the mail vs looking at it online Not having a blog of m own Twitter lets me know what others are thinking. Even getting Shibuya246 updates quicker than the RSS feed. The only thing w/Twitter is the 140 character limit, have to learn how to abbreviate to shorten length. I had someone send me a Google wave invite already and it wanted me to download Google chrome to view. I’m running IE, is there any difference btween the 2? In an email you have to be careful what you put in the msg or how it’s worded b/c people will twist it around and take the msg as something bad when no offense was sent. So sometimes your caught “Between the Rock and the Hard Place” It’ll be for you to decide which form of comunication you want to have.
Gomen ne for being so windy.

@MarijnRongen; Thanks ! Seeing it now , was on my non-smartphone and the above image was too big, Nijntje/Miffy is definitly in one of those post stamps 🙂 I still have Dick Bruna books in my closet from when I was a kid.
Damn I feel old now 🙁

@Whipcracker. You can either install Google chrome or download the google gears extension for IE which it should give you as an option too when you boot wave.google.com on IE.
Google Chrome is the fastest browser between Firefox and IE, and uses the least resources as well so it is really quick on a netbook or low-spec laptop. So far I use chrome as my primary browser on my Vaio sub-notebook and Firefox on my main computer.
But when They port over the xmarks plugin i`ll be saying goodbye to firefox 🙂

So the choice is yours really, try chrome and see if you like that as a whole; or just insteal Google Gears for IE !

lithiumangel@gmail.com = my addy if anybody wants to wave (Shibuya246 wave ikimasu ?!?! )

I will check you out on wave when i get a moment. Had a brief look the other day but wasn’t sure exactly where it fitted in between email and Twitter. Interesting points on Chrome and FF. thanks 🙂

oops; too bad there is no edit button on stuff you comment.
For those new to wave, check out this complete and helpfull guide: http://completewaveguide.com/

I’ll have to work on that ‘edit’ button. might need some time to get it right. thanks for pointing it out 🙂

The stamps looks so cute! If only they have such stamps over here.

I think when speed is concerned, tweeting is a better option compared to blogging. It’s really convenient to tweet and blogging consumes a lot more time. Furthermore, I prefer quick updates over too lengthy blog post. As for Google Wave, I’m still trying to figure it out.

There are lots more good stamps coming out all the time. I will post some more if I see a Rilakkuma version or maybe Mameshiba. Anyone seen these yet?