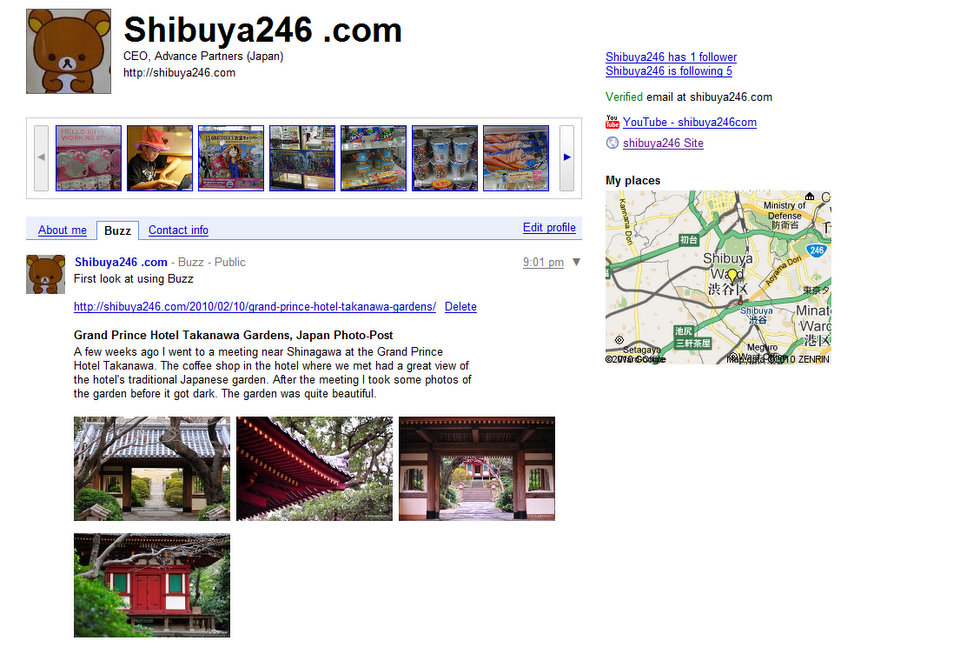 I was talking with a friend the other day and saying that Google was missing out on the SNS boom that Sites like Facebook and Twitter have caught onto. Google has been the starting point for many people when they search for something on the Internet, but with Facebook gaining users by the millions and Twitter moving up quick, it appeared that people’s attention was being diverted from searching the main Internet to just searching within their own community group.

YouTube is slowly evolving into a social network itself by improving its profile and groups pages. I thought that maybe Google would try and grow using their YouTube channel, but was surprised to hear they were going full scale with their SNS efforts by building it into Gmail.

The idea of using email to be the center of the Social Network is a risky one, as many users might feel their inbox is getting invading by unnecessary messages. Some other users have already cut back on their use of email to a certain extent and instead are using other forms of communication such as Twitter and Facebook.

Here is Google’s intro to Buzz explaining the service benefits.

I have not been using email as much as I use to, but instead have started to spend more time using Twitter and also interacting with users here on shibuya246. In order to use buzz I actually had to sign up for a gmail account in addition to the other email accounts I already keep track of for incoming mail.

The up-side of Google basing their service around the mail platform is that they already have millions of current users. They don’t have to start from nothing like Twitter did and this should help them catch up faster.

Once they integrate the much awaited Google Wave project to this as well, Facebook and Twitter may have something to think about. We have already seen Facebook buy out FreindFeed and have to assume they are busy writing the next version of Facebook with new features and a better user interface.

If you want to find me on the web there are a number of ways you can follow me. The first one, of course is to follow me on this Site, shibuya246. You can now sign in using your Twitter account which makes it easier for commenting. In addition you can follow me at these Sites:

and now we can add Google Buzz to the list, where you can find shibuya246 at Google Buzz

It will be interesting to see how Google goes with this project. They have introduced SNS type projects before, one such idea was Google Friend Connect. With gmail so central to the Google service platform maybe Buzz will have more success.

I wonder what Microsoft is thinking after their launch of Bing has now quietened down, and will Apple be content being the pioneers of new hardware these days as much as software, or will they also want to get a piece of the social networking pie?

What are your views on Buzz, Facebook and Twitter? Can they all compliment each other, or will we see some buy-outs and amalgamations?

Haha…
after reading a lot of your post, it’s kind of funny seeing my name in one of your post…..

yes, you were my first follower on Google Buzz. Fantastic NO.1! 🙂

Isn’t the Google Buzz on a separate page from your inbox though? Granted, someone still might feel like it is invading that space, but I don’t think it will clog up your inbox.

That being said, I do a lot on email. (And Gmail hass way better features than other emails hosts I’ve used in the past, so you may want to give it a try now that you are registered) I get email notifications for things like blog & forum comments and am already always checking it because I also do my business through email. I am not a fan (or member) of Facebook or Twitter, but do enjoy a selective set of blogs.

I use gmail already for the shibuya426.com domain. It looks like normal gmail but I cant use buzz on this account yet. I had to sign up for a separate account to start Buzz. 🙂

Actually, some updates from your Buzz will be sent from your inbox (e.g. Comments). But I don’t think that the Buzzes will be sent back from the inbox so it won’t clog your inbox with unwanted messages unlike facebook. That’s why I use a seperate Yahoo email account for signing-up with services (with 1000+ unread messages mostly from Facebook and Friendster)

Google buzz is rolled out a daily basis, probably alphabetically. So it took me 1 1/2 day to have buzz in my inbox (i have a very old Gmail account) – so you could’ve just waited *LOL*

I don’t know what to think of Buzz yet; I do like wave tough but that’s something you need to have a use for, to be usefull. Most people hate on wave, cause they just don’t have a use for it and don’t want to admit it.

On the other hand; it’s never a bad idea to follow shibuya246 on more than one service =)~ *added*

RT @tweetmeme Google Buzz, Japan Marketing http://bit.ly/9Uo85o Another great SNS app. I usually have FaceBook and Twitter going at the same time. now I guess I’ll have to add Buzz to my collectio. I am now following you on Buzz also. 🙂
Have a great weekend.

Which prompted Google to realise this: http://gmailblog.blogspot.com/2010/02/millions-of-buzz-users-and-improvements.html.

I am not a big fan of Google. I have run into may issues with their system. I have noticed myself using Twitter for updates from the ones I follow instead of typing in. Just googling it takes too long and things are not listed as they should be which is one of their problems. I am making googly eyes at another. lol

Thanks for informing me. Now ill just setup my buzz and i will follow yours. Also, google should integrate buzz on the wave soon. By the way, do you have your google wave account?

I cant remember my wave account. I will try and look it up again 🙂

kay! Just done tweaking my buzz and already followed yours ^_^

Heard about the Wave, now comes the “Buzz” – as far as where all this new “stuff” (SNS) will go, there will be more clutter or “white” noise, and it has the potential to become the new “spam”. I use Twitter and gmail as my primary communication apps, with keitai texting a close third. The new WordPress mobile app allows me to blog from the “street” using photos to supplement content. I won’t be using the “Buzz” – I closed my Facebook account because there was too much social “crap” (no meaningful comment or content). There was a saying in the U.S. in the 1980’s – “He who dies with the most toys, wins.” – sort of fits the proliferation of SNS. 😀

nice summary of the current trend 🙂

There was an item on Google Buzz in Japan times today about how the people you most frequently contact by email are not necessarily your best friends! eg business associates.
It gave the example of your boss finding out you’d been corresponding with a rival company

I don’t use google mail so I’m unlikely to try it to be honest.
I signed up for Google Wave, but I don’t understand it all , maybe you need to have all your contacts in google mail already for it to be of any use ?

I refuse to use twitter, because I already spend far too long on the internet already. I’ll stick with facebook and linked in for now.

Initially SNS seemed different to mail. The concept of following someone to see their “mail” certainly would have seemed strange when email first came out. It may not be that long before we see that exact concept emerging though.

In Twitter DM (Direct Mail) and normal Tweets are 2 different classifications of the same thing, publication of a 140 word bite. In a new version of mail you could elect to broadcast to all your followers or just a person privately. This is a step further than the current Buzz or Wave method which sees a buzz update as quite different to mail but nonetheless viewable from the same console.

Microsoft is sitting in the wings with Hotmail and may be tempted to try doing something as well. If Google and Microsoft both compete in this space we should definitely see some changes to the way mail is used.