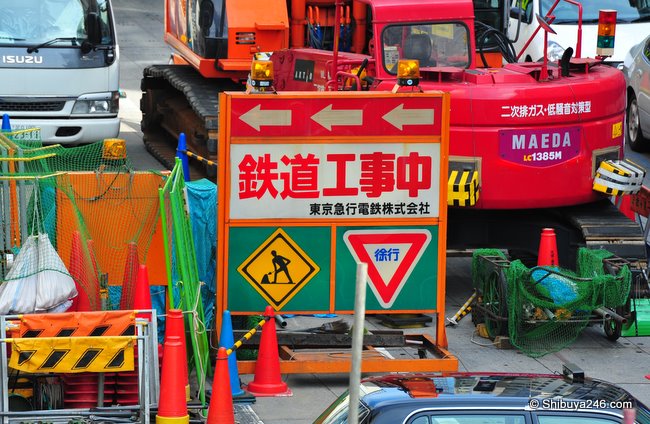 There has been a lot of railway construction going on recently around Shibuya station. The Fukutoshin （副都心線） line construction was completed between Wako and Shibuya linking through Ikebukuro （池袋） and Shinjuku san-chome （新宿三丁目）.

At the moment, construction is moving ahead on the southern extension of this line which will see the current above ground station for the Toyoko Line be moved underground and linked up with the Fukutoshin Line. When this is complete in 2012 you will be able to ride from Wako-shi passing through Shibuya and straight on to Yokohama.

This linking up or amalgamation of multiple train lines has been going on for a while as the Tokyo train system expands to meet consumer demand for more trains and better connections.

With the Toyoko Line platform moving underground, it can’t be long before plans for the redevelopment of Tokyu Department Store above Shibuya station are put into motion.

Can't stand in the way of progress. Maybe this will help if Tokyo gets the 2016 olympic bid being able to help with the flow of all that will come to tokyo. Have also noticed that all the signage is and even the construction equipment is so much more colorful than over here.
I can read what 2 of the signs say in the one picture one is lost the other is music on TVU, what are the other ones for? Also seeing that the JR Yamanote line runs completly around, what is the total cost for a trip on that line? Just curious.
Btw, love the clean look at the top of your page.
Well have a great weekend!
Ja mata ne

Thanks for the compliment about the site. I have been working on a few more changes that are coming up as well. More soon.

The signs were for Hikari TV, which is an internet TV broadcast service by NTT. (70 channels and 10,000 videos online) The TV shows you can see on the left sign are LOST and 24. the bottom one is for Prison Break.

If you dont get off anywhere when travel round the Yamanote line then technically you could just buy a platform ticket for about $2, but since it takes 1 hour to go around they might be suspicious when you leave.

I like how they still try to keep it as aesthetically pleasing as possible at the constructions site for the underground rail. Back in Vancouver when we're building the Canada Line to link up the Vancouver Int'l Airport, the constructions for the underground rail is a mess along the roads!
You gotta love the Japanese for their ingenuity to save as much physical space as possible.

They try to keep it as organized as possible, but it does drag on for years. There is a lot going on under that road though 🙂

I love the underground networking of the subways in Tokyo and Osaka. This is great!

Yes, they have made networking of subways and trains an art form. 🙂

I'd like to go underground and take some pictures of the large cutting machines. Those things are amazing. There is a lot more going on under the road than we think. 😉