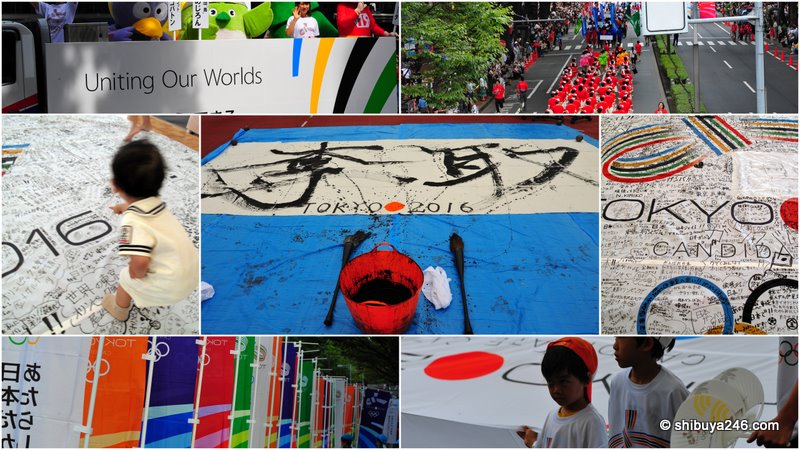 Tokyo has been bidding for the 2016 summer Olympic and Paralympic Games. Today is the final vote in Copenhagen to decide which city will win the right to host the Games.

Tokyo has been a strong front runner in the race. If Tokyo succeeds it will be busy times ahead for the city as it readies itself for 2016.

Thanks to @puffdragon01 (via Twitter), aka whipcracker, a long time reader of shibuya246, for details of this Yahoo report 48 hours prior to voting.

the race to host the 2016 games—pitting Chicago, Rio de Janeiro, Tokyo and Madrid—is still too close to call. Which means committee members will spend the next two days feeling like the most popular people on the planet.

And for a guide as to exactly what happens at the vote here is the explanation from Associated Press.

VOTING PROCESS: IOC members vote by secret ballot until one city receives a majority. The city receiving the fewest votes is eliminated after each round. The maximum number of rounds is three.

HOW MANY: The IOC has 106 members. The president, Jacques Rogge, doesn’t vote. Members from a country with a bid city in the race are ineligible to vote as long as that city is still in contention. That means 97 members are eligible to vote in the first round, more in subsequent rounds. In the event of a two-city tie in the early rounds, a runoff is held between the cities. If there is a tie in the final round, Rogge can vote or ask the IOC executive board to break the deadlock.

Morning Walk in the snow

RT @Shibuya246: Tokyo 2016 Olympic Vote, Japan Living | Shibuya246 http://bt.io/G5A
I sure am pulling for Tokyo to get the 2016 bid looks to be a very tight race. Every city has someting to offer. If Tokyo gets the bid, maybe by then I’ll be able to visit, and get to see a very beautiful country putting on a very large show for the whole world to see.
Domo arrigatto Shibuya for all the hard work you have put into reporting about all the different aspects of the Olympic bid process, and all the different things that the city of Tokyo is doing. All the features have A #1. Ganbaette Tokyo!
And thanks for the mention above.
Anything I can do to help just hollar. 🙂

Reading a lot of forums, i found that Rio is beeing favorite for tomorrow but since they are host for the WorldCup2014 has minimal chances to be the winner due to date proximity… Chicago has Obama’s presence, and 45% of their people opposed to the event… will be a lot of discussion there O_o.
The one having real problems is Madrid (don’t really know the details but looks like IOC members compared the city with the other candidates and resulted in a huge lack of effort). There will be the King Juan Carlos, who is well received in the committee but i dunno if he’ll be influent.
In tokyo’s side its already known so, i just want to say good luck to the rising sun ^^”

Rio de Janeiro was officialy awarded the 2016 Olympic Games today over Tokyo, Chicago and Madrid. Congratulations to Rio for their succesful bid.

Yup. Heard it from today’s newspapers, downunder in New Zealand.

What a news! Congratulations to Brazil! There’s always a first time for anything.

I feel sorry for Japan they put a lot of work into this. But I have to say I’m really happy for Brazil especially because I’m Brazilian and from Rio hehe Really excited and surprised. And of course thinking if they can handle both World Cup and Olympics.

Wolrd Cup should be a good practice run for the Olympics

RT @Shibuya246: Japanese Kakeibo (家計簿), Japan Living | Shibuya246 http://bt.io/LXi
My wife takes care of all the bookkeeping. She breaks down everything we spend into different catagories, and posts that info into MS Money, on the computer. That way she knows how much we’ve spent on everything we buy. Even down to the last penny. This als helps her when it comes to tax time, that way we can get the maximum amount of deductions on the tax forms. She does a great job of it. Been doing this for really a long time.
At least Rilakkuma can help to records straight. with his laid back attitude, does he help you keep track of all yours.
When will the contest be comming?