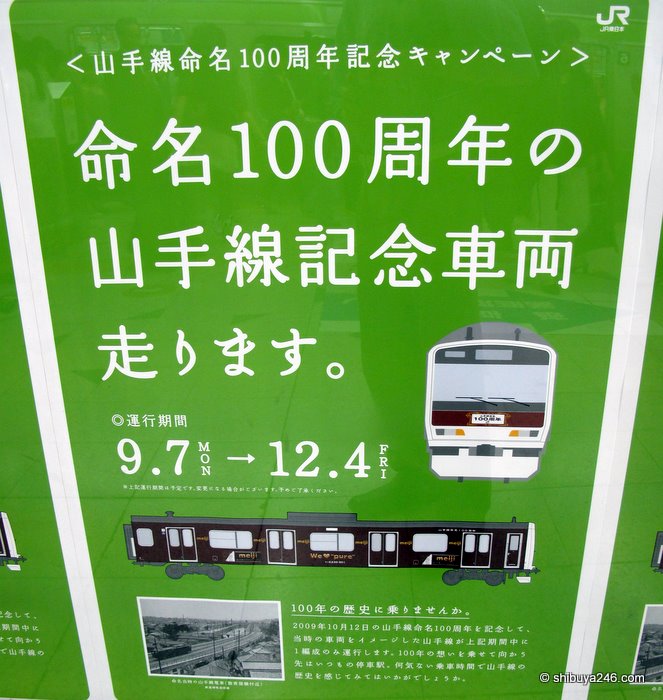 The Yamanote Line is currently celebrating 100 years since its naming. The original portion of the Yamanote Line was built in 1885 between Shinagawa and Akabane called the Shinagawa Line, passing through areas such as Tokyo station, Akihabara and Ueno.

The top part of the loop stretching between Ikebukuro and Tabata, completed in 1903 was called the Toshima line, 豊島線.

In 1909 after the line was turned into an electric one, both lines were merged and called the Yamanote Line.

In 1925 the line between Kanda and Akihabara was opened for the Yamanote Line and the loop was completed.

To celebrate the 100 years, JR has wrapped one of its trains in the original brown, ‘chocolate’ colors. I say chocolate because Meiji Chocolate has managed to feature its products on the trains wrap, which makes you wonder whether this is just really celebrating the 100 years or just an excuse to collect some more revenue through advertising.

Someone has made a video and put in on YouTube also

Just strange to choose a chocolate brand for the 100 years celebration. We can see the advertisement more than the 100years mention.

Totally agree. Are we supposed to notice the 100 years or focus on the chocolate

RT @Shibuya246: Yamanote 100 Years, Japan Trains | Shibuya246 http://bt.io/BTc
Quite the marketing stratgey, if I do say so. now all we need it one colored white and one colored like a graham and have them all meet at the same time, and we’ed have Smores. lol:)
That was just a joke for the day. But combining Meji chocolate and the Yamanote train seems to be a win-win for both companies.

Wow. I didn’t know that the Japanese subway was THAT old.