Perhaps you have enjoyed the irori at a Japanese restaurant before and not realised the cultural significance of it? Perhaps you have wished to buy a irori for your own home but not realised you could? Take a look at this cool pick on the Amazon Japan corner at Shibuya246. Wow! 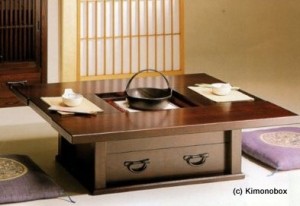 The irori are a type of hearth that is used typically for cooking food in Japan and traditionally also for some warmth.

I would never have assumed something like this could be purchased via Amazon. I wonder how competitive their prices are – does anyone know?

The irori are hearths that are more than often seen in rural Japan these days. In downtown Tokyo, we have always had the kotatsu to keep warm and from which to serve (not cook though) meals. And the number of times that my kids have tried to get their whole bodies underneath the kotatsu is not funny!!! Anyone else find this happens with kotatsu?

I love the traditional style of irori …. but I will have to look up kotatsu on Amazon next and see what is there to compare prices!! Are you online shopping savvy?