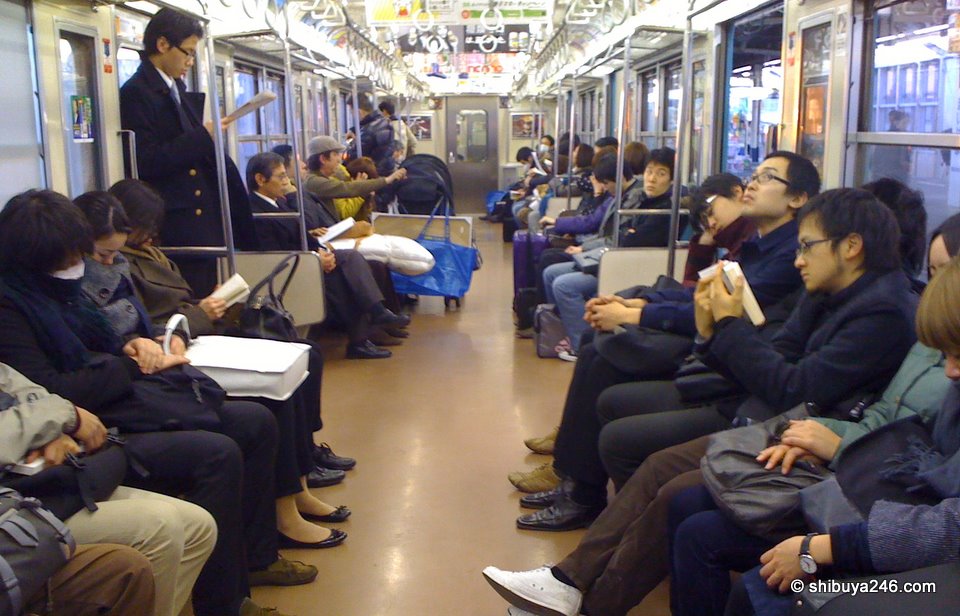 Japanese train travelers often find themselves with a 30 minute or longer train ride where they can either read a book, surf the web on their phone, listen to some music or maybe just catch up on some much needed sleep. The art of the “power nap” is not falling in to such a deep sleep so that you don’t know when to get off the train, but being able to shut down your power unit so you can recharge your batteries sufficiently for the rest of the day or nights activities.

On the Yamanote line you don’t see as many people sleeping because the stops between the stations are quite frequent, roughly every 3 minutes. On the lines like this one heading out to Chiba each station is spread further apart and the trains are often heated from under the seats. If you sit on one of those seats for a while with the doors shut, you can easily fall asleep.

I find if I am on a very crowded train its easy to just close my eyes and “power nap” for 15 minutes standing up. When you get off at the your destination you actually feel quite refreshed. I wonder if anyone has done research into whether our bodies are healthier by having many small naps during the day, rather than just sleeping once for a long period at night?

I am definitively in favor of small “power naps”. I used to enjoy this on the trains until I started carrying my iPhone with me. Now I find I am checking mail or surfing the web rather than getting my batteries recharged. Recently, my battery is only lasting about as long as the iPhone’s and that is not long enough 😉

Do you like “power naps”? Can you easily (do you) sleep on the trains?

I usually do a very nice powernap @ the last recess time at school usually every 2:30 p.m… Used to be like that because I sleep late at night reading blogs like this ^_^ lol 😀

excellent. glad to know I am helping to keep you awake 🙂

They have definitely done a lot of research on sleep. Short naps are not long enough to reach the deeper levels of sleep that your body & brain needs. It’s not bad to also add the short naps during the day, but you wouldn’t be able to function too well if you only depended on those.

Interesting post! I tend to find myself nodding off to sleep on most train rides. I just can’t seem to stay awake since most of those trips take around an hour to reach my destination. But I never do see so many people asleep all at once. I normally wake up pretty embarrassed as my head is always sort of “nodding.” haha…

yes, if your head nods down on the wrong person it can be rough 😉 I remember seeing an oldish salaryman sitting next to a young girl. She fell asleep and her head fell on his shoulder. He was looking nervously at the door for a few stops but didn’t got off until she woke up. I am sure he missed his stop.

I don’t understand how people can sleep on trains! Even if it’s a long ride, really warm and comfy, I just sit there wide awake staring into space haha. Actually yes, I did read a study in Reader’s Digest that mentioned how Japanese people nap more and are more healthy for it. It apparently helps with weight loss? http://www.rd.com/living-healthy/19-weight-loss-secrets-from-around-the-world/article172978-14.html

Thanks. I will take a look 🙂

power naps are the way to go. a lot of us students know it can help… but we rarely do it! i love napping whenever i’m in a moving object… train. plane. car. there’s something interesting about that.

I don’t think I would do it, for example, on the NY subway either 🙂

I automatically drift into sleep mode if I’m travelling on the bus and gets to sit down. Unfortunately, I tend to miss the stop too >_<

I think it was Thomas Edison who used to take power naps while inventing things. But the Japanes have it down to a science. I suppose if it was warm and cozy sitting there and had a ways to go before the next stop, I might nod off. but I’d be affraid i would miss my stop. but this would be a first trip there so I would try and stay awake to make sure I didn’t miss a thing.

Nice subject, I’ll translate it for my site 😉

Sounds good. Thanks. I will come and have a look later 🙂

looks great. thanks. I just tweeted about it as well. We should make this a regular thing 🙂

..I take ‘power naps’ almost every time I’m travelling ,trains the most…

A warm train on a cold day works every time 😉

I often fall asleep thru. the day…most at inopportune times!

I just wake up from one of those power whenever I felt tired I shut down myself but after the nap I felt extremely alive. Recharging your batteries when it’s time is important to become more efficient in your work.

I power nap on the train from work, it about 25 mins so i can afford to take a quick one. I someone how magically know when to wake up without listening for the train station. Its pretty mysterious.

It’s amazing isn’t it. The body seems to have the stations programmed in so you can sleep and still make your stop 🙂

Sleep everytime a take the train mouhahaha.. even if their is no place to seat.. Think I was a Japanese in an other life.. I am now a Standing sleep master 😛
If you see a gaijin on the den-en-toshi line in a standing sleep session.. big chance that is me ^^

I am always afraid to fall into a deep sleep and not awake in time, I have seen this befor when a guy suddenly woke up and had already gone back and forward a few times in the train lol. But it is indeed easy to fall asleep in the Japanese trains.

I always sleep on the bus. I mean, i have a 45min-1hr bus ride and i catch it at 6:30 am. So i pop my headphones in and drift off. Although i HAVE to have my music on or i probably will fall asleep for real>.> Though a couple times ive fallen asleep anyways and missed my stop, so i have to wait for the bus to go to the end of its route and turn around(good thing i live in hawaii so i can do this=P).

I always sleep in transport, even if it’s Sunday and I have slept well at night. =)

Fasinating! I never take naps though. Probably because when I was a kid my mother would make me and I hated it so I refuse now. lol. I actually have trouble sleeping now so naps are not good before nighttime.

nightmare nap on the train. You might wake up screaming! Everyone would be surprised 🙂

How did you manage the shots. You used a different camera didn’t you, something smaller….haha.
But did no one yell at you waving a newspaper?.

iphone. everyone was asleep 😉