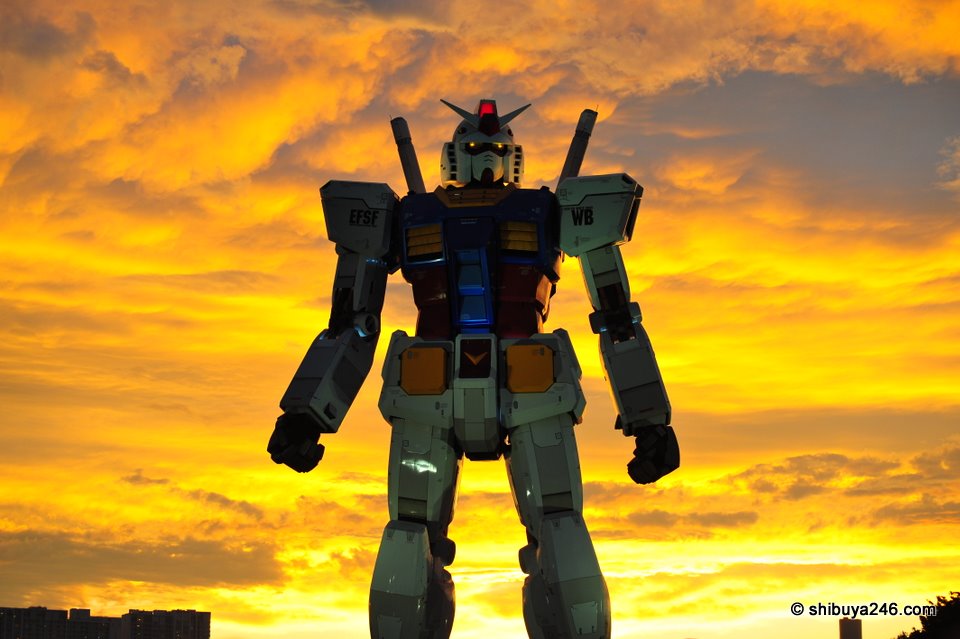 The 1/1 scale Gundam is going to be back on display in Shizuoka this time. You will be able to see it while riding the Shinkansen? That would be a cool view from the window. Mt Fuji on one side, Gundam on the other.

It will be on display from July 2010 until May 2011, and will then move to other Prefectures in Japan before returning to the Bandai factory in Shizuoka.

You can see more pictures of Gundam when it was on display in Odaiba, and the wedding event that was held at the base of Gundam. Also, some extra photos on my flickr account and wallpaper.

Will you be going to see Gundam in Shizuoka?

RT @tweetmeme Gundam Shizuoka, Japan Living | Shibuya246 http://bit.ly/5XA0eK It’s good to see the Gundam statue re errected. Now even more people will be able to see it in it’s glory. Hopefully they will put it in such a way that it would be shownrising in front of Mt. Fuji-san. Now that would be a pretty magnificant photo-op=epic photo! Don’t you think, especially at night with it all lit up?

Too bad it’s not on Odaiba again; that’s quite a nice location for it and it doesn’t bother “the city” that much if it’s there.
I’m glad they are keeping Gundam longer on display than last time tough !
I already have two Japan trips in my agenda for 2010, April, and November. I suppose I could get a shinkasen to shizuoka with all my camera gear 😀

If you look back at the Google map I linked you can see the Bandai factory on the other side of the station. I guess having local industry helping the economy is a good way to get approval to use the park. Great to see Gundam is not going to stay locked away in tiny parts, but will be displayed again for all to see.

Nice. Im planning to go Odaiba next month since I will be in Tokyo for prob 4 days.Hope I can get to see it! Not sure if its kinda out of question, but I’ve seen pictures of One piece boat Going Merry crusing at Tokyo Bay. Wonder if it’s still around?