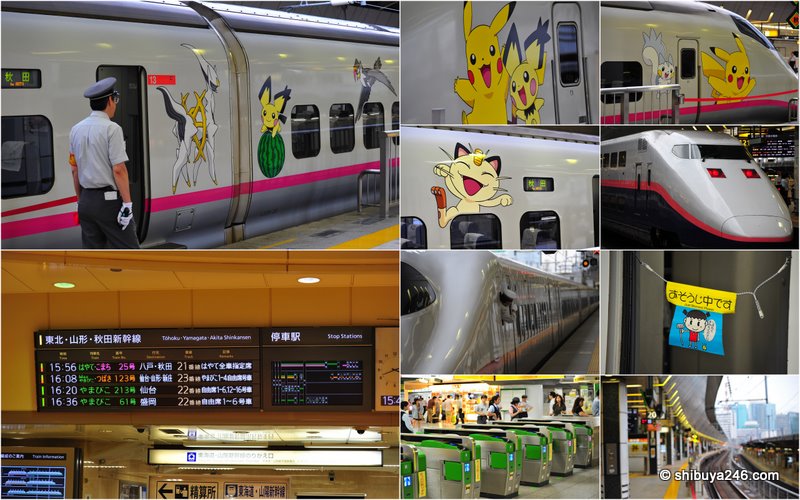 We have a number of winners for the recent K-ON, Rilakkuma giveaway contest. It has taken me a while to go through the list and figure out who won each of the prizes.

The giveaway contest was in 2 parts. The main prize was for picking the date and time of day of the photo with the green ticket gate at Tokyo Station. The second part, minor prize, was for the best reason for winning the competition.

I almost confused myself with the time and date. I posted about the Pokemon Shinkansen on 23rd July, 2009, after going down to take the photos the day before, 22nd July, when we had the solar eclipse.

Here is the comment I made on the solar eclipse post about going out to Tokyo Station.

Most of you were able to connect the green ticket gate photo of Tokyo Station with the day I went out to shoot the Pokemon Shinkansen. From the stats it looks like these 2 pages, station and tokyo were well viewed in the hunt to find the photo.

Also, it looks like some people were able to find the photo on flickr as well in the Pokemon Shinkansen set.

Flickr is actually where there is a problem. For some reason my settings on flickr were set to not uploading the EXIF information from the camera. I have turned that on now so recent photos show all the EXIF including the time and date stamp. Without the camera providing the EXIF info, flickr took the date stamp of the upload, not the date the photo was taken. So it shows 23rd July instead of 22nd July.

The end result of the contest is, the actual date I took the photo was on July 22nd, 2009 just after 4pm. Here is the EXIF data from the camera.

and the winners are first prize to applel0ve

The runner up prize goes to TurningOtaku for his 4 top reasons to win, particularly for K-ON and Haruhi being his introduction to the world of Japanese animes.

Winners, can you send me an email at blog @ shibuya246 . com and tell me the address to send your prizes.

There were heaps of other good answers and the dates for the main prize photo quiz was a bit confusing. I hope those that didn’t win were not too disappointed. Thanks to everyone who participated and also helped to promote the giveaway. There will be many more chances to win in the following weeks / months. The next giveaway will be a sweepstakes contest and will involve twitter.

I am shopping around for prizes now for the next giveaway. What do people want to win?

Congrats to applelove and turningotaku!
and thanks for organizing this giveaway =)

Thanks. Well done guys. I wish I could send you all something 🙂

RT @Shibuya246: Giveaway Contest Results, Japan Anime | Shibuya246 http://bt.io/AFTl
Congats to appleove, Renechong and Turning Otaku for their winning entries. This was a great way to start out 🙂
There was alot of great choice to be made, hope you enjoy your prizes 🙂
The next contest, w/twitter cool. How about some of the train line gifts musical keychains or the models of the train engines. I think those would be some great prizes.
I am really looking forward to the next one. YEA!

Wow! I can’t believe that I’m one of the winners :d Thank you so much and congrats to Renechong and Turning Otaku also! Btw, I just noticed that I already have the cloud memo pad so you can add it to Renechong’s package since that was her favorite prize (:

A personal congrats to you 🙂

Thanks! and congratulations to applelove and renechong! I luuuurrrrvvvveee giveaways and as I promised, I’ll be your best friend forever!^^

Ahh of course i wasn’t one of the lucky guys, after all that typing to! Oh well i neven seem to have luck with these=/ Ill try again next time^^ And congratz to the winners! Go people who have better luck than me!

Oops i meant never… How did i type neven=.=”

never say never. next time is just around the corner. everyone wins sometime 😉

so very close. next time 😉