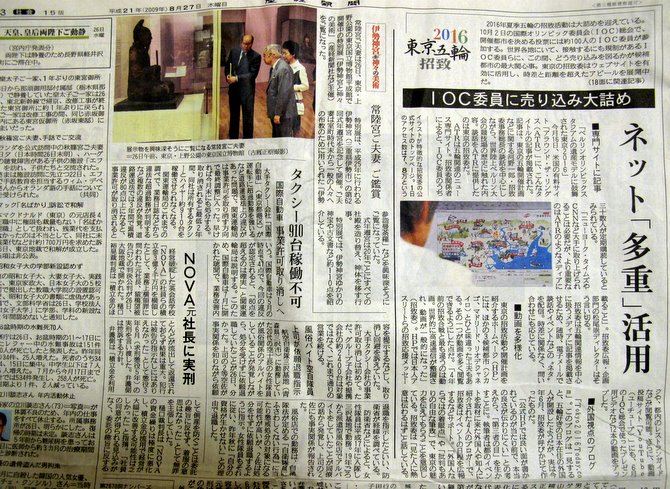 It is now only about 35 days to the big decision on which city hosts the 2016 Games. The decision will be made in Copenhagen on 2 October, 2009.

A number of students who are part of an association to help support the activities of Tokyo’s Bid give their time and energy to plan and assist in events as well as blog about behind the scenes stories.

A number for them plan to travel to Copenhagen and have a blog about this also. In the future they are thinking of making an English version of this. (for now they just have the Japanese one).

While I was visiting the Train Exhibition at Shinagawa, I bumped into an event for signing a large Tokyo 2016 support banner. I met the above students and signed shibuya246’s name on the banner to be taken to Copenhagen in 35 days.

There were many athletes and famous signatures of support.

RT @Shibuya246: Tokyo2016Today.com, Japan Sports | Shibuya246 http://bt.io/9VF Every body show your support. You and everyone over there should be very proud of all the work that has been put behind this epic event.
Even though I live in America, I still support Tokyo2016 bid effort. Ganbaette!

I’m still feeling dubious about Tokyo 2016 Olympics when the city itself needs to be seriously overhauled. I would still support Madrid because Spain has a bad economic crash thanks to America. It makes more sense for Madrid, not for Tokyo, according to my understanding.

Or even a better idea. When the US military bases in Okinawa are kicked out, Japan should bid for Okinawa 202X Olympics.