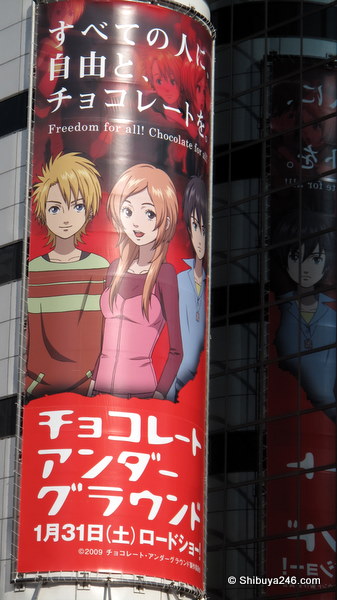 Since Jan 16 the ads have been up in Shibuya promoting the animation movie which is an adaptation from the novel “Bootleg” by Alex Shearer, a British author. On the right is an advert showing at Shibuya crossing.

Story
“The story centers on two 13-year-old boys who live in a country that has banned chocolate and mandated fruits and vegetables for daily consumption. The boys discover a stash of cocoa and sugar and decide to run a bootleg chocolate factory, in complete defiance of the government run by the oppressive Good for You Party. Their misadventures eventually sparks a revolution in the country. The theatrical version will add 20 minutes of new footage and present the entire project in widescreen format. ” – Source: ANN

Preview
Yahoo Japan has a preview at:
http://streaming.yahoo.co.jp/p/t/00098/v04623/
The official site trailer is here:
http://www.choco-bar.jp/trailer/index.html

Alex Shearer in Japan
According to the official website for the production at http://www.choco-bar.jp/index/index.html Alex Shearer will be coming to Japan and giving an introduction on the first day of screening followed by a talkshow the next day. The dates are:

31st Jan at Shibuya Theatre – Tsutaya, movie starts at 10am, introduction for Alex Shearer at 11:30am following screening and then a second introduction at 12:25 followed by the second screening of the movie for that day.

1st Feb a talkshow between Alex Shearer and the translator Kanehara will be held from 6:30pm.

It looks like you may need to get reservation tickets if you want to attend the talkshow.

Photos
Here are some photoclips from the official site:
To see more go to http://www.choco-bar.jp/story/index.html

LABI says “Thanks for dropping in”

I heard something about a movie. I loved anime, but I just wish I had more time to finish it.