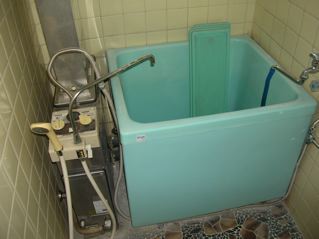 Condominium buildings in Japan are called Mansions. In some countries you might think a mansion would be set in a beautiful countryside estate with a huge building in the grounds. In Japan, a typical mansion will be a 10 story concrete building in the middle of the city surrounded by more mansions.

There are a lot of okushions in Japan particularly in the bigger cities. Tokyo has many.

With the price of land still high despite some recent economic troubles, many people looking to buy their own property face the decision of whether to move further out of central Tokyo and buy something new, or maybe look at the option of buying an old place and renovating it into something unique to their own tastes.

One firm that has just started working in Japan that is focused on renovation of old mansions is BAKOKO. I spoke with them recently about a project they had just finished.

Most people don’t think that buying a home around Tokyo would be affordable, but unlike London or New York we were surprised when we didn’t find ourselves priced out of the market here.

New to Tokyo, we decided to transform a typical ‘mansion’ apartment into a contemporary Japanese home. We settled on an small apartment in an eastern suburb, only 30 minutes by train from Central Tokyo. With a distant view of majestic Mt. Fuji to the West and a gaudy neon-lit ‘love hotel’ to the East it truly embodies the modern paradoxes of Japan.

The renovations are quite stunning. When you compare the very old style of the interior with how the finished product turned out the difference is amazing. They have also done well to retain a modern Japanese feel to the apartment, which particularly can be see in the tatami room. (nice touch with the flowers).

Here are some of the comments from BAKOKO on how they went about the renovating process.

Before demolition, the apartment was typical of Tokyo’s rapid urbanisation of the 1960’s and 70’s. The small 37m² (400ft²) unit was divided into two Japanese-style rooms with tatami (reed mat) flooring separated by paper (fusuma) sliding screens and a western kitchen. It was quaint and cozy, but that type of interior was simply made for a different generation.

We gutted the unit and transformed it into one room, but with space in short-supply we found that retaining some traditional Japanese features made sense. For instance, new tatami mat area serves as flexible space for entertaining, contemplation, and occasional dining during the day. As is typical in Japan, a futon and blankets are unfolded onto the floor mats from the adjacent closet at bedtime.

Once the work started it looks like BAKOKO got things moving quickly and the finished product came up looking very clean and bright. The difference between old and new is easy to see.

Sliding doors run along nearly the entire length of the opposite wall, concealing a walk-in closet, full-height mirror, book shelves and a hot (pink) desk. We do a lot of work from home. The sliding wall allows us to quickly shut away our personal clutter when a client comes over. However, its equally vital to be able to shut your work away and forget about it at the end of a hard day.

A green line of foliage hangs above the dining kitchen counter, indirectly lit by a thin recessed strip of light opposite. Since standard fluorescent light strips are relatively inexpensive, we seized the opportunity to be creative with built-in architectural lighting features that create subtle effects and atmosphere throughout the interior.

The bathroom was divided into a new wet room with Hinoki timber floor (or sunoko) accessed from a small changing room with compact sink and mirrored vanity unit. Typical of modern Japanese bathrooms, the small, but very deep bathtub has no faucet. Instead, it is filled from digital consoles in the kitchen and bathroom.

The computerised system allows users to set the bath water temperature and remotely reheat it either on-demand or by setting a timer. A chirpy female voice chimes in when the bath is ready. The system also controls the hot water for the rest of the household.

Japanese style squat toilets are common in most older apartments and a reform of this area goes without asking.

Ensconced in mat black walls and illuminated within a halo cast from the concealed light above is the Washlet. From a control panel on the side of the western style toilet the user can operate an built-in bidet function.

It looks like the renovations designed and carried out by BAKOKO have dramatically improved the livability of this mansion and no doubt increased its sale price as well.

If you are interested in renovating your own mansion in Japan or just want to find out what options might be available, you can give Alastair a call at Main website for BAKOKO get some details.

Alastair will be speaking about a computational design and construction project at the next at the next Pecha Kucha at Superdeluxe (July 29th, 7pm).

Didn't see this on my Rss reader page yet but found it via twitter. That company sure knows how to renovate an older apartment and make it new lookig but retaining the older ways. The place really does look bright and functional,not a single space is wasted. the only thing is that the office space looks a bit cramped I'd need just a bit more room.lol
You got youself one great business going. GO Shibuya GO!
Hope you get more visitors to your site so they can see how cute the little guy is.:) Say hi to him for me.
Ja mata ne

Yes, they did a very good job of using all the available space in this small mansion. Well done BAKOKO 🙂

This is amazing! Still a small space but looks so open, airy and inviting. Bakoko seems to be a very talented company. Thanks for all your posts. I'm always looking forward to your articles and am even using the information you provide to help me while I'm in Japan with my son next month. Arrigato gozaimasu.

Thank you so much. I am really glad you find the information useful. I enjoy writing the different types of articles and it is always good to get comments as feedback on how to choose new articles and improve. 🙂

Yes, it could be a good investment idea in this current down market. People are still looking for quality homes and in Tokyo presentation goes a long way towards determining price.

Looks fantastic. Sterile, just how I like it. Er, well, anyway, look forward to more of these types of posts. Keep it up!

Thank you, and thanks to the guys at BAKOKO !

Considering how many マンション there are in 東京 with many looking like they were before in 1994, renovating is a great idea.

wow I love the new style of the house