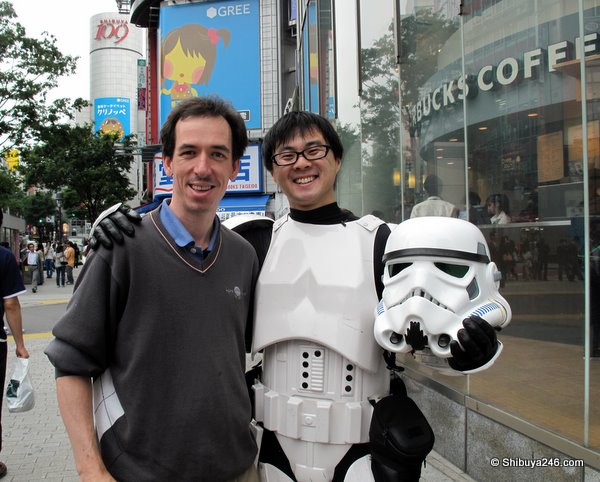 There is always something interesting going on in Shibuya. Today, I bumped into Danny Choo from http://dannychoo.com who was in Shibuya to do some filming. Many of you will know Danny from his many great videos on YouTube of the “Dancing Stormtrooper”

Danny and his team were filming and I managed to take a couple of photos in between the film shoot. There were lots of fans who wanted to crowd around and see Danny in his Stormtrooper armor.

Here is an old clip from 2007 in Shibuya Center-gai

and a more recent 2009 clip in Akihabara

For all other clips, you can see them here on YouTube on this special Tokyo Stormtroopers site.

Here is the link on Danny’s site to the Stormtrooper Portal. Everything and more to do with Stormtroopers and Danny Choo.

I am sure you will find more details of this film shoot later on DannyChoo.com once it is edited. Don’t forget to check back at Dannychoo.com and look for it.

Thanks Danny. See you at the next CGM.

Huhuhu! He mentioned on going to Shibuya but never thought someone would really bump into him! How awesome!

Yes, it's a small world isn't it. Thanks. Shibuya is the center of the universe xD

way to go Ken. hadn't noticed you there. Nice to almost meet you as well 😉

It was great meeting you. Hope to speak with you more at the next CGM. 😉

Sounds great. Look forward to it. Talk then

Very cool! Nice to see more evidence of what a friendly and easy going guy Danny is not to mention the fact that you now have a picture of THE Tokyo Stormtrooper and you – how cool is that??!!

Thanks Shane. "A friendly guy this Danny Choo he is", and thanks to Danny for letting me take a photo in between the filming. Much appreciated. 🙂

Awesome~ Did you stay there long while they were filming?

Didn't want to interrupt the filming so I left them to it. There was already a big crowd forming. Go the Stormtrooper. Awesome!

Ha! Now I know what you both look like. Well, I always knew Danny looked like a storm trooper(must have been hard coming out the birth canal.) But I'm surprised you don't look like a Relaxbear, Shibuy246. You learn something new every day.

When we took the photo, Danny did ask "with helmet or without?". Since I didn't have my Rilakkuma bear outfit handy, we went without helment. B)

Great meeting you today!
Looking to getting quality time to chat next time.

Thanks for stopping by, Danny. Likewise, great to meet up today. Can't wait to see the full show and more pictures.

Definitely, next time lets get a chance to talk some more. I'm always in Shibuya.

what a coincidence, I wonder if I will be that lucky when I am I make it to Japan and visit Shibuya.

Thanks Jamaipanese. Hope you're not frightened away by the look 🙂 I'm sure when you come to Japan you will stormtroopers on every corner. 😉

Ohayo gozaimasu,
Wow! Tokyo Stormtrooper…aka Danny Choo and Shibuya 246 same place same time. What's the chance of that? This is a great way to wake up in the morning, and see 2 great bloggers together! This is the greatest way to keep up with what's going on there in Japan. And you forgot Rilakkuma 🙁 he probably would have had fun dancing with the Stormtrooper…lol:) And now we get to see what you look like.
Have a great day,
Ja mata neB)

Thanks. Nice of you to say that. Much appreciated 🙂

oh man, why could this have happened when I was in Shibuya … two of my favorite bloggers in one place … I would have been a little puddle of fan-boy goo after melting in the awesomeness 🙂

Think that Rilakkuma should have got down there too!

Rilakuma missed out. Maybe next time! B)

You never know who is lurking on the streets of shibuya 🙂