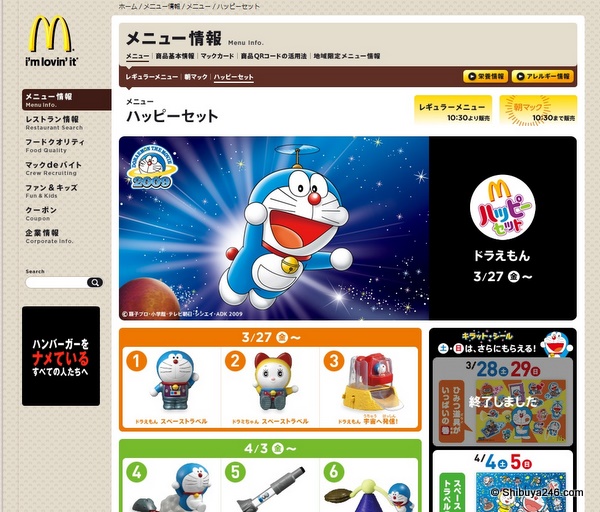 With the launch of this years Doraemon Movie, McDonalds has tied up with Doraemon to give away some figures with its Happy Meal Set.

The figures change during the week. Here is a quick look at the McDonald’s Japan homepage with the characters shown.

A closer inspection of the characters shows that from April 3 onwards kids can receive a model Doraemon Fuwafuwa Rocket (どらえもん ふわふわロケット). Item No.5 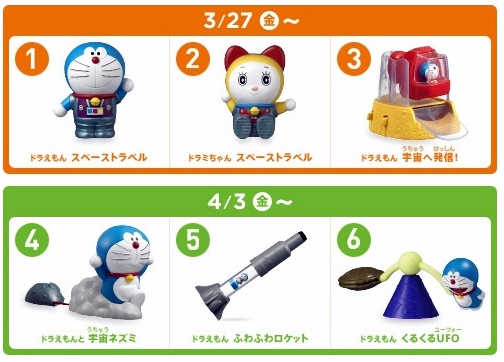 Do you think this Doraemon Rocket bears any resemblance to the Tapedong missile that North Korea are planning to fly over Japan around the same time?

I can just see the kids picking up their complimentary Doraemon rocket missile from McDonalds and going home to play with it, only to see the North Korean version on the news later that night and their parents cursing it.

Think you should have added April Fool as a tag for this post! What an interesting concept – Doraemon attempting to fools us with his return rocket launch – timely posting Shibuya246!

I predict – the Doraemon Rocket will shoot down the Tapedong Missile. I want one. It's happy meal time.

If Doraemon shoots down the Taepodong then it should be free Happy Meals for everyone!

i want one too!

DORAEMON!!
did u get any of these figures?! hehe XD

I actually got the rocket launcher and the one in the picture. very cute

I want one too!lol:) The Mcdonalds here in the states is offering the characters from the movie "IceAge" this time around. The wheels at Micky D's never stop turning.