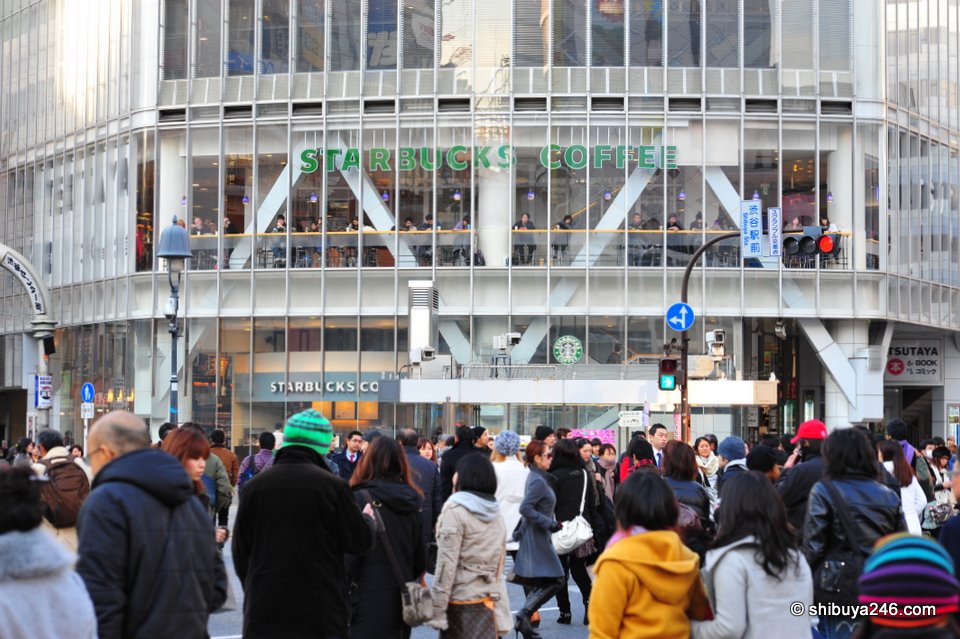 After the weather changing from very cold, to pleasantly warm (at least when not in the shade), I took a quick walk in Shibuya to see what was happening. After a few shots around the crossing area and a lunch at Royal Host, I was heading over to Shinagawa on the Yamanote Line when the trains stopped. It gave me an opportunity to take some photos on the platform and then also take a walk from Osaki to Shinagawa.

As soon as I headed to the Station they started to announce the trains had stopped.

It was starting to get crowded and I was running short of time, so I decided to catch a different line that would take me to Osaki, close by to Shinagawa.

The day ended up fairly good. It took me longer to walk from Osaki to Shinagawa than I thought, but apart from arriving late it was a nice walk. I have a few pictures I took on the walk, around the Gotenyama, Yatsuyama and old Tokaido route area, which I might load up tomorrow. I also took a walk at New Year around the Takanawa area which I haven’t uploaded yet. Must get busy ^^.

What do you do if the trains stop? Do you find an alternative route or wait around until they start again?

First of all… that has to be the largest Starbucks I have ever seen Lol!. Looked like a nice, cold day out; it’s already getting warm here in Houston,Texas. Great pics as always. Do they ever shut down the intersection on the weekends on the weekend, due to too many pedestrians out and about?

It looks big but actually its not (for a major Starbucks that is). You have to order on the bottom floor (which must be about 5 meters wide!) and then go up stairs to drink (there is bench that runs along the windows and a row of chairs (sets of 2 and 4) behind the window seats) as well maybe 40-50 seats all up?

This photo (taken on a tour I escorted last year)
[img]http://shibuya246.com/wp-content/upload/1442-100_0470.jpg[/img]
sort of shows how close the chairs are (kids in the background are on the window – on the right hand side of shibuya246’s photo) and Im at the chairs behind them)
Its a great place to watch the world from though…..
Maybe the Starbucks in Australia are just big!

very true. Starbucks basically just gets the window space. Tsutaya needs the rest of the building to help us buy and rent videos 😉

No, they don’t shut it down. It just gets busier and busier incrementally from Thursdays till Saturdays as more and more people pour into Shibuya for the nightlife.

I absolutely love the first pic of the girl waiting inside the train to leave, nice framing; captures the moment perfectly (especially with the pretty deserted looking path infront of the train)

Oh great to see more photos of Shibuya! Do you suppose the bamboo is permanent or just something still out from New Year’s? And the first time I saw a rat outside a pet shop was in Japan haha! The photos from the stopped trains are so interesting, but rather inconvenient.

I think the bamboo might be permanent. It looks more Japanese than the rats 😉

“Sounds like a passenger may have fallen on the rails”. That sounds more like a suicide attempt than anything.

This will probably be the 1st. place i would want to take pics. The Starbucks at the enterance to Center Gai.

Straight in for your coffee. Great idea 🙂

The 2nd place to visit. Everytime I watch the trailer for the movie, it still brings a tear to the eye.

RT @tweetmeme Shibuya Streets Vol8, Japan shibuya streets | Shibuya246 http://bit.ly/5o6J7c My second most favorite post besides the conbini monday feature. Were you able to find out exactly what happened to make the Yamanote line stop? I’ve never been on a train before to be able to feel the effects of finding an alternate route. Another great photo set, as usual. You are always able to capture just the right thing in each photo you take, whether it be people, places, or other interesting things. 🙂
Well Gotta go make supper then watch the new season of “24” Jack Bauer to the rescue again.

Jack always comes through in the end. I wonder if they would make a series with Jack saving Tokyo from a terrorist attack?

Alternate routes? I wish. We don’t call CityRail “Sh!ttyRail ” for nothing. Unlike Tokyo, Sydney’s rail network spiders out in about five or six directions from the CBD with areas generally only serviced by one line – if yours is down, you’d better hope they organise some rail buses or you’re stuck! Oh, and buses generally only cover areas not serviced by trains. Ah, I love Sydney transport 😛 On a pleasanter note, lovely photography, as always – makes me feel like I’m actually there.

Great pictures as always. I’ve only been delayed once on the trains after a suicide attempt in Uguisudani. I was going back to Shinjuku from Ueno. As there was no alternative train to take with the Keihin line also stopped I just had to sit tight for 40 mins whilst the ambulance and the police did their business.

Great catch on “girl-checking-mail”.
When a train is late, all they say is “look at the arrivals board”.

At least in Jp they can get tv on mobiles.

Thanks. Yes, mobile tv is also a good option 🙂

I would find an alternative unless I hated my job! lol

Get your Starbucks coffee right here

Nice photos as usually. Is Starbucks popular in Japan, because here in Toronto you see it almost everywhere (in a little bit richer areas)?

very popular, at least in Tokyo. Seems like there is a store every new building you go to.