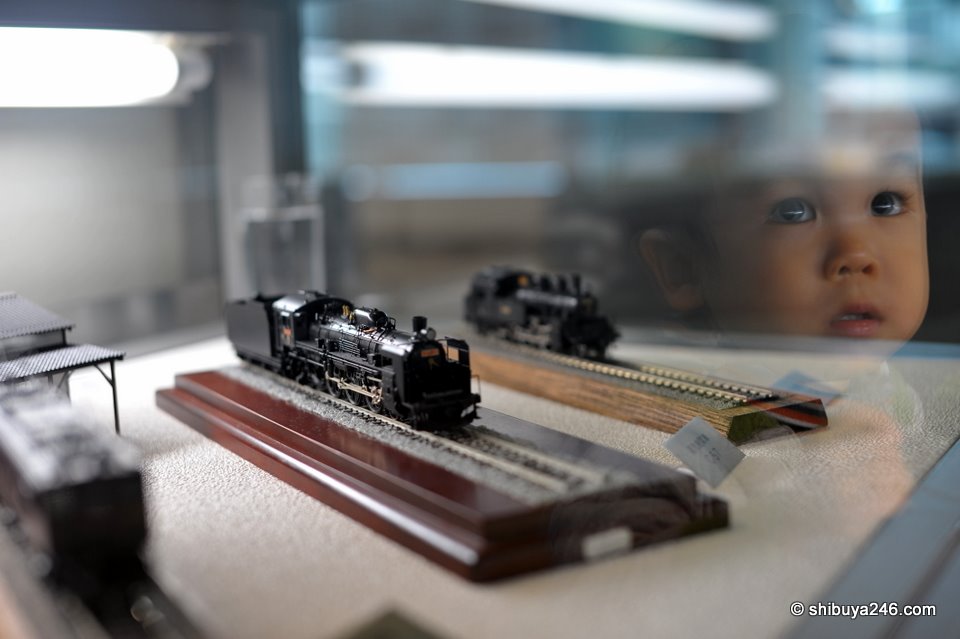 I took this shot at the Mitsubishi Minatomirai Industrial Museum in Yokohama. I have more photos of the trip which I need to go through and sort out, but wanted to share this special shot first.

The boy is actually standing in front of the trains looking directly at them, but his reflection makes it look like he is standing behind the case looking at something else. I first took the shot from behind the train looking through the case at the boy and then came around with the intent of taking the train only. I was surprised to see this great result on the cameras LCD display.

I had started the day using my Canon Powershot G10 and switched to the Nikon D700 when I saw everyone was enjoying themselves so much we were going to be in the museum for a while. The Museum, like the Anpanman museum we visited, had a very relaxed policy on cameras. Basically you could photograph and film whatever you wanted.

Do you prefer to shoot with a light handheld camera or a heavier traditional lens camera?

View from my window

Very much so. This was a good stop on our visit. I am back in Tokyo now and should have the other photos up soon as well as a couple of Yokohama night pics.

That is the cuties pic ever!!!

Great pics, looking forward to see the others.

Bloody good shot. I like the right timing, you have chance with a lot of good situations!
And seem to almost never miss one. 🙂

Thanks. There are great shots all around us, we just don’t always take them. I like it when the camera surprises you as well. 😉

The reflectionas seen through the eyes of a child, with the help of your great photographs.

If I have time I shoot with heavier artillery, otherwise I use my Flip HD and clip stills from the FMV. Japan seems to be very touchy about photography, yeh?
Great photo of “train boy” !!

Thanks. Some stores won’t let you photograph at all. I think they are afraid you might be trying to copy their products.

Just got my Conbini box! Love it thanks so much for doing that!!!

Great. Pleased to hear it arrived. 🙂

The first picture looks rather stunning and artistic in a way.