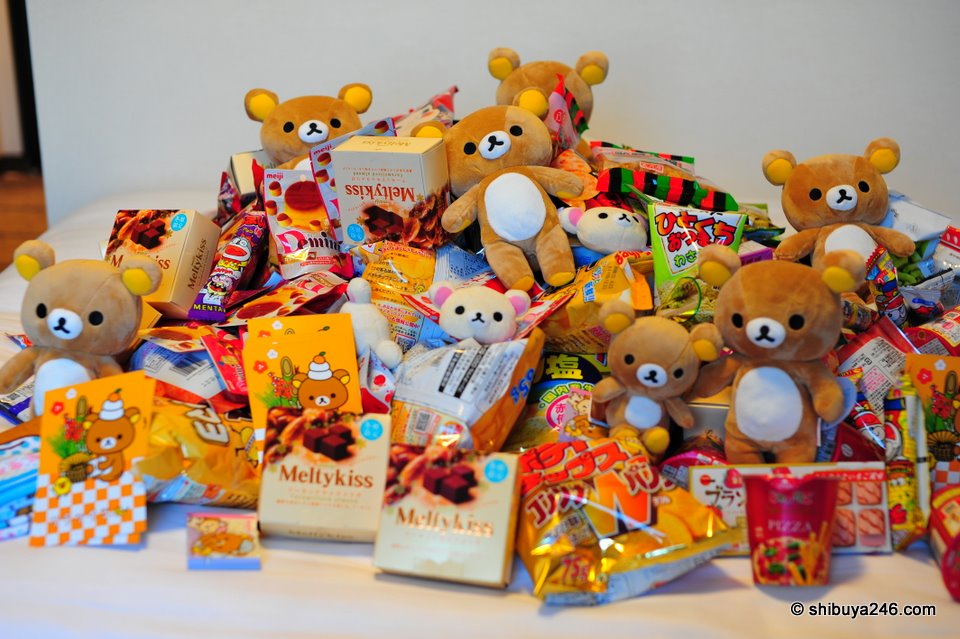 The Conbini Box #1 offer has been completed and the packages sent out. I took a few snaps of the process and also shot some live ustream footage.

Picture seemed to go on and off when I was recording. Maybe I need to stick to the digital camera. Rilakkuma makes an appearance at the end.

The final result was 11 boxes being sent out. It took me about 10 shopping trips to over 30 different convenience stores to buy all of the items. The stores kept running out of what I was trying to get.

The Rilakkuma store had stopped stocking the small Rilakkuma I had shown in the sample, so I had to supersize Rilakkuma a bit. Some of the other items also had to be supersized due to lack of stock.

To keep the postage down the packages have been sent out surface airmail. The post office said they should take about 2-3 weeks for delivery depending on your local post. When they start to arrive it would be great if you can let me know, so I can judge delivery times in the future. For those who want faster postage next time, I will review the EMS postage, but probably it will be double the price of SAL.

I hope you enjoy the Conbini Box when it arrives.

RT @tweetmeme Japan Post, Japan Conbini | Shibuya246 http://bit.ly/7C1BAh Congrats to all that ordered a conbini box,Enjoy. Hopefully some day I can order a conbini box.
Domo Arigato Shibuya for all the time and effort you put into this endevour. Everything looks quite yummy, and your even getting Rilakkuma, who has become my favorite bear.

That’s a lot of shopping trips….how fun! The spread of treats are so colorful. Domo Arigato.

Very nice packages! I think SAL is definitely the way to go as the middle ground between very expensive airmail and very slow seamail. I actually didn’t realize SAL was still an option as I thought it had been discontinued or was restricted to certain classes of items. I’m glad to see I was wrong.

I can vouch for the Lotte Cube gum. It’s my favorite gum in Japan (and comes with free Post-It notes), though I like the “soda” (ramune) flavor much better than the fruity mint ones. Also, you mentioned on the video that the Yaokin Bo (sticks) had Doraemon, but I think that’s actually a knock-off character which resembles Doraemon…but I could be wrong!

Thanks. I am hoping SAL works out ok for everyone. Bit worried that we cant track the parcels but keeping my fingers crossed 🙂

Super awesome 🙂 ! I wonder what those guys at the Conbini store must have been thinking when you were raking up items by the bucketload hehe !

When I buy certain stuff from Ebay from Japan it’s shipped with SAL, it takes a week (to Amsterdam) ; but those are usually just one or two CD’s in a bubble-wrap envelope – not a box. So it’ll be interesting to see how long this will take.

They probably thought I was crazy hungry 😉

Where can I look to know prices for int’l shippings?

This is a great commitment to the fans of the site. First time I ever see something like that.

Rilakkuma Hills indeed. I went to some stores in Yokohama today that had more Rilakkuma and Mameshiba goods. Also a Ghibli store. So much cuteness. so little money left in my wallet 😉

Those packages look awesome! I agree, this is a great effort you do for the fans. I love Rilakkuma and Japanese snacks. The conbini must be happy to see you when you come in to shop! (>w<)b

I am so excited to receive this; the cost was significantly less than the effort you put into all of this. I can’t thank you enough!

You are welcome. Hope you enjoy. Don’t eat all at once 😉

I’ll try to keep that in mind. It may be difficult though.

fantastic. glad it arrived. thanks

I want them all!