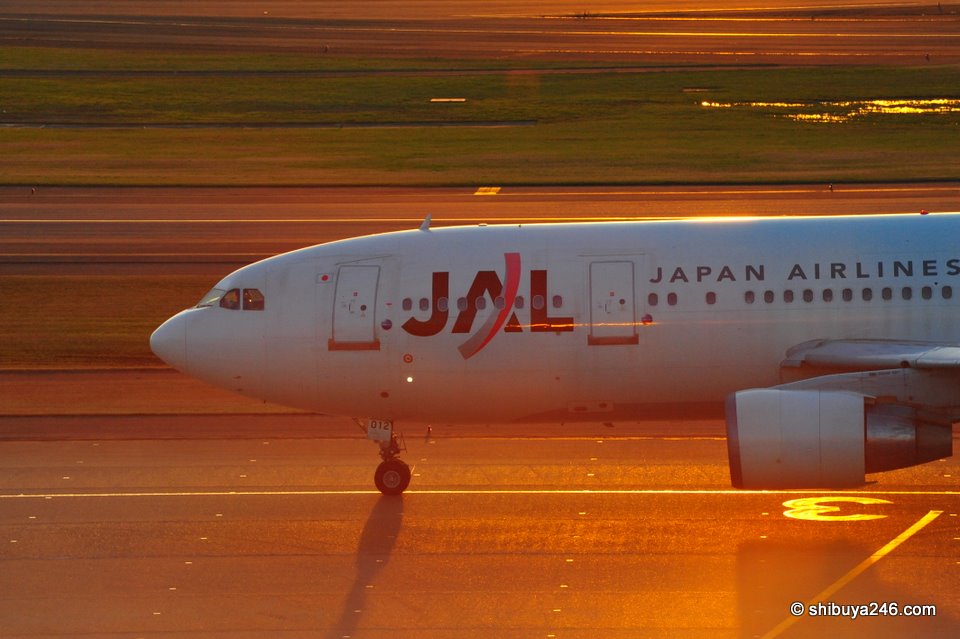 With Haneda Airport adding more international slots to its operation, and a new terminal building being almost finished, it is bad timing for the Government to see Japan Airlines in such financial trouble. It is expected there will be some sort of bail-out for the troubled airline, but the details are not known yet.

I went down to Haneda airport to take a few pictures of planes before possibly we see the logos or symbols on them repainted. I got there a bit to late in the evening and so most of the shots were of the runway filtered by a setting sun.

When the JAL bailout does happen there will be lots of details to fill in. Who will be in charge of the operation, what special conditions are imposed on the airline, what preferential treatment it might get, how many companies it will be split into, what will happen to the unprofitable routes?

It will be interesting to see how this works itself out in the New Year. No doubt, politicians don’t want to mess with the status quo until the holiday season is over.

Are you a JAL fan or do you prefer ANA?

Dayum, you are a freaking master of that camera! You could give lessons on coping with difficult lighting and colour.

You’d probably have been arrested in the US if you took pictures of planes on the runway 😉 If you had a Geordie accent, you’d definitely be terrorist material!

RT @Shibuya246: Haneda Airport, Japan Travel | Shibuya246 http://bt.io/CBBq
Great late afternoon pictures. Have never flown on either of those airlines to give a fair review. The only airlines that the wife and I have flown on is American.

I have only ever used JAL, but my experience was top-notch! I have flown 1st class and coach with them and was not disappointed either time!

I have been flying JAL for years and instantly feel at home when I board their planes.