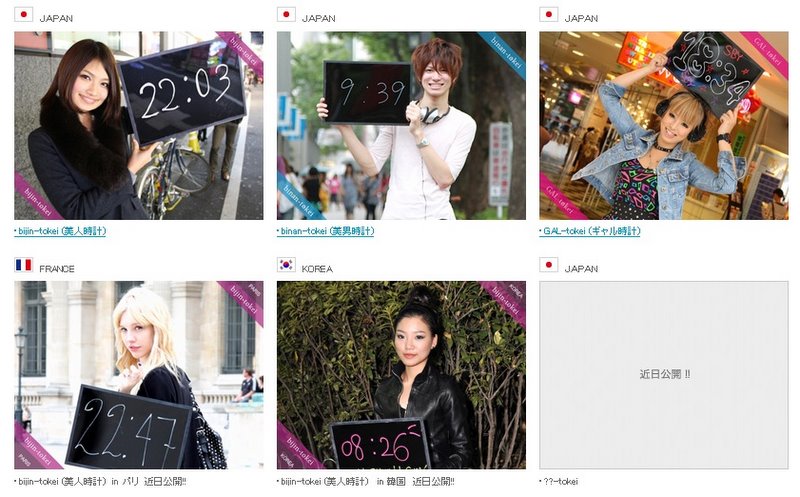 Earlier this year a Japanese web site came out called Bijin Tokei, Beautiful Girls clock, which introduced a different cute girl for every minute of the day in clock format. It was blogged about by a number of people at the time. This was a great idea for a website which has now gone on to produce a top selling iPhone application as well.

Recently, the company announced they are producing a Sapporo version of their Bijin Tokei and on taking a fresh look at their site I realized they have actually produced a version for France, Korea, one with Japan guys, and also a version for Shibuya Gals.

What type of clock would you like to see made next in this format?

AH ! So that’s what this was all about ; a few weeks ago when I was walking around in Shibuya some photographers were selecting nice gals at the crossing infront of the ichi maru kyu building to hold up that sign.
I was wondering what the hell that was about, and now I know 🙂
At any rate, a clock with something ? Hmmm.. how about Gunpla holding the time on a sign 🙂 ?

How unfortunate this coincidence. Thanks for the tip 😉

Even if i were boarding now, not making in time. But (comma),
you could both stop and send some pic for the lesser fortunate.

I need to know the location of this spot. 😛

I’m at bijin-tokei now, kawaii girls… no moe yet… no glasses until now.
I like that site.

RT @Shibuya246: Bijin Tokei Update, Japan Single Photo | Shibuya246 http://bt.io/BLAf
I wish i could be standing there also. You guys are having all the fun. 🙁

aha, to eat or to hit the streets. A tough choice indeed! 😉