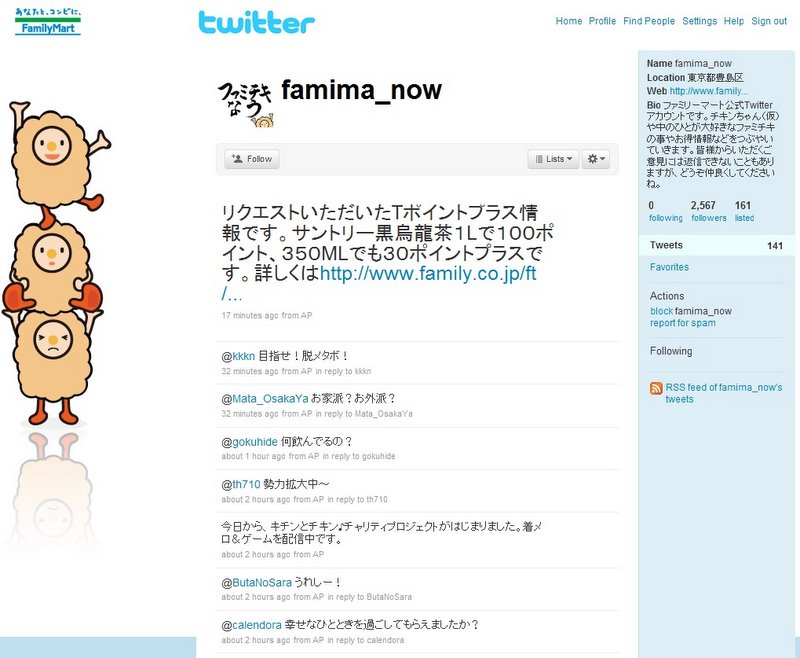 Family Mart announced last night that they are starting a Twitter account to promote their chain of convenience stores. They are the first convenience in Japan to begin using Twitter as a form of communication with their customers.

Their username on Twitter is @famima_now. They already have over 2,000 followers on their first day so you can expect this to become a popular account.

To begin with, the @famima_now account will be talking about their fried chicken product, Fami-chiki.

Looks like Family Mart are getting a head start in an area where many Japanese companies are looking to get involved. Usage of Twitter is growing in Japan, and its use by companies as well as individuals is an exciting prospect for those who want to see more business transacted or promoted via digital platforms.

Are your stores starting to use Twitter to promote their services, brands?

RT @Shibuya246: Family Mart on Twitter, Japan shopping | Shibuya246 http://bt.io/BGTu They make a great addition to the Japan twitter scene. I’m surprised that the other conbini chains, 7-11, Lawson, or AM-PM, wern’t using twitter sooner. Which chain is larger in Japan? This just gives Family Mart a leg up on the competition. All forms of adverts help. Great for Family Mart and great for Twitter. Now if they have a special sale or new products, they can let the people of Japan know about it. 🙂

I am sure we will see a response from the others very soon. The fried chicken wars seems to be “heating up” at the moment 🙂

This’ll certainly be interesting if for no other reason than to snap up customers with quick announcements. If someone peaks at their mobile phone running a Twitter app and sees something of note, they may pop by and pick it up. I’m actually kinda surprised more companies haven’t jumped on this sooner.