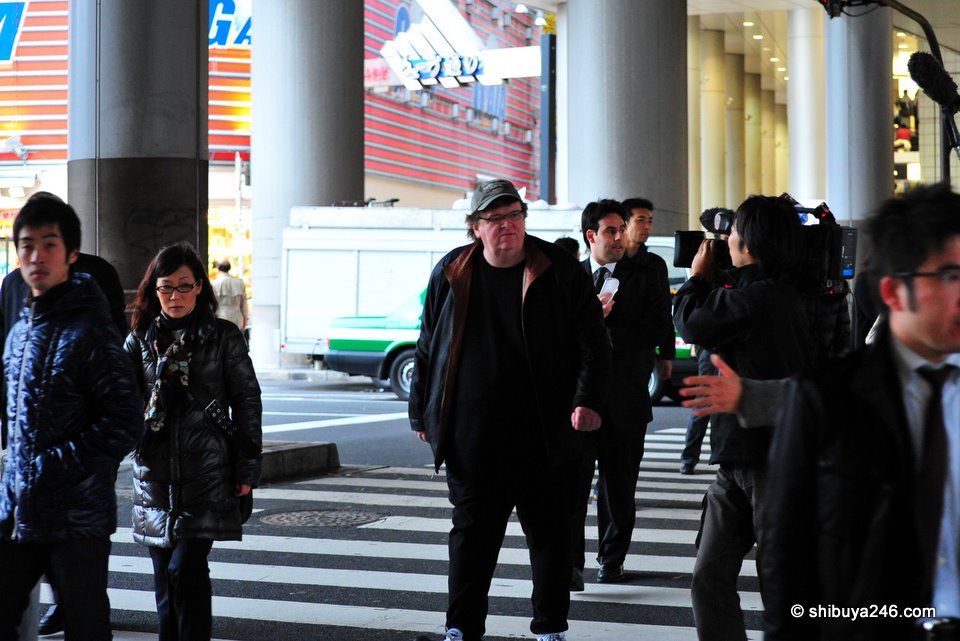 Michael Moore was in Shibuya today filming with what looked like the NHK film crew. I was just passing through and saw him as they were filming near Hachiko and Center-gai.

I didn’t want to get in the way of the filming so here are just a couple of shots from around the Scramble Crossing area. After that it looked like Michael and his crew were heading up Center-gai to check out some shops.

Not sure what they were filming for but probably has some connection with his latest film, and also a number of press conferences. From dailylife.com article:

Director Michael Moore attends the ‘Capitalism: A Love Story’ press conference at Tosho Hall on November 30, 2009 in Tokyo, Japan. The film will open at a limited number of theaters in Tokyo and Osaka on December 5, and throughout the rest of Japan on January 9, 2010.

and from the Kyodo article:

U.S. documentary filmmaker Michael Moore urged people in Japan Monday to get back a social security system based on the spirit of mutual trust, warning that the country appears less caring following the excessive reign of ”conservative” governments.

Have you seen any of Michael’s movies? What do you think of them? Are you going to see this latest film?

Let’s see how he handles jet lag.
“Ohio go say mass!” Lol… I hope he speaks english and doesn’t try any japanese.
Usually what he talks about isn’t funny stuff needing a warmed up audience.

Yes, his style of “interview” doesn’t really work if he is not talking to people and getting them to confuse themselves. “The sound of one hand clapping” in this instance is probably silence 🙂

RT @Shibuya246: Michael Moore in Shibuya, Tokyo, Japan Japan | Shibuya246 http://bt.io/BFGn
He sure is a different type of film maker. Mostly controversial. He says what he thinks is right. Hope he doesn’t try and stir the pot in Japan. Will have to read the other articles to see what he is up to.

NHK? DOES THAT STAND FOR NEW HELLO KITTY FILM? LOL . Just kidding but of course in my state that is the first thing I think of. 🙂