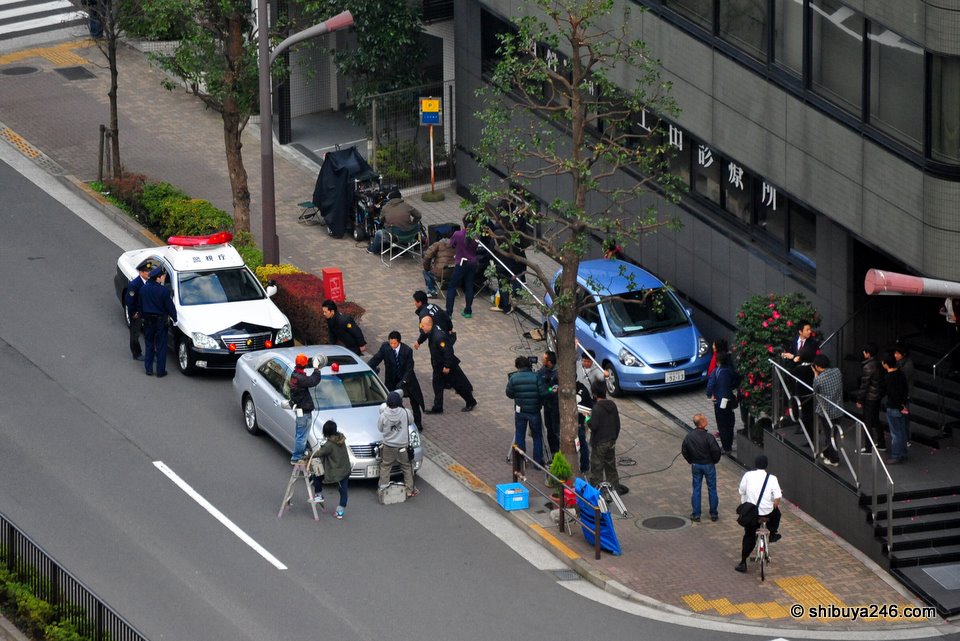 I was looking out of my window at lunch time and saw this police car stopped behind another car with people milling around. At first I thought we might have another scoop like the Sakai Noriko arrest or something. On closer inspection I realized they were shooting a drama for TV.

Can you see the film crew in the top left hand corner looking at the monitors?

I did some work as an extra and production assistant for Toho many years ago. Seeing the crew looking into the monitor and gathering around reminded of those good times. I have never been close to filming outside of Japan, but I was always surprised at Toho how few shots it took to get a cut. Is that the same overseas?

I tried to embed a scene from one of the dramas I appeared in, but YouTube has removed the embedding function for the one I wanted. Here is the link -> http://www.youtube.com/watch?v=TH4Zlg7aySE. My scene was around the 5.10 minute mark. Not really a big spot.

My best memory of being on location (ロケ現場) was a trip we made to a hot spring somewhere north of Tokyo. There was a scene required where some yakuza entered the bath area when about 10 women were already bathing. With both parties fully naked the men demanded the women get out of the bath. In front of camera for TV it was necessary for them to hold towels in appropriate places. In between shooting everyone just dropped the towels and paraded around. The camera crew all reached for cigarettes and started chatting to the girls. Quite amusing.

Filming in Japan is not as well organized as say New York where there is a special administrative body to coordinate street closures and filming in public places. It can be hard to get permission in Japan for street filming due to the inconvenience it would cause to other road users.

I wonder when I will see this episode on TV. Do you have much street filming going on in your part of the world?

Ooo do you know what drama they were filming here?

I couldn’t tell what it was called. will try and do some checking. 🙂

RT @Shibuya246: Japan Drama Location, Japan Living | Shibuya246 http://bt.io/BDAy I’ve actually been an extra in a few movies, just crowd shots, but was paid $75.00 USD a day. Great experience getting to see how a movie is made is an experience in it’self.
The DFW metro plex area is used quite extensively for major motion pictures, tv movies and CM’s. If you remember the tv show “Walker TX Ranger” w/Chuck Norris the city of Denton was used quite a few times. In the movie “Logans Run” in the end when the people come out of the domed city that was was filmed in Ft worth. And the movie “Unecessary Roughness” was filmed in Denton. they used the univ. of North Texas and their football stadium and class rooms also in FT Worth at the world famous honkey tonk “Billy Bobs. And who can forget the tv show “Dallas”
watched the video, great little piece, they actually made you look younger.
Let us know the name of the tv show.
Make sure and have a great weekend. 🙂

They should make me look younger. It was about 15 years ago 😉 The show was called “Geisha Koharu no kareina bouken”.
Dallas was a great show. I remember watching that one. $75 sounds good. Must cost a fortune to get a big crowd together.

The guy on the bicycle, calmly waiting (or watching), has no jacket on.
Isn’t that cold then?

So, no star with hands on the walk of fame??

I think the guy on the bike is just waiting to get passed them. I took 4 photos and he only appears in the 2nd one. It was a warm day yesterday so maybe he was just enjoying the sun 🙂

a lot of car companies (Subaru, Nissan, Chevrolet and Ford) shoot CM in this part of California – scenery and no crowds – number of music videos have also been filmed in the region. Star Trek, Land od the Los and Iron Man scenes shot in the southern part of the kingdom. The area is pretty heavily used for filming.

Star Trek would be an interesting set to be on

The only filming going on in my village is the occasional streetview car passing through. There does seem to be some regular filming in Eindhoven, our nearest big-ish city where I work part-time.
My friend has been an extra in a few movies and shows, but those weren’t shot near where we live.

Barring the new Clooney film, “Up in the Air,” nothing is really ever filmed in St. Louis.

I hear the tv show “Bones” is popular over there?

have seen this on cable in Japan along with CSI, 24, Prison Break etc. Looks quite popular.

man, here in LA near downtown there is endless filming.. usually commercials and tv shows.

you can pretty much figure out what they are filming for (tv, commercial, or film) based on the size of the set and how many days they are in the location.

for tv shows they always post “notice of filming” announcements on the entrances of apartment buildings stating what show is filming… so you never have to guess!