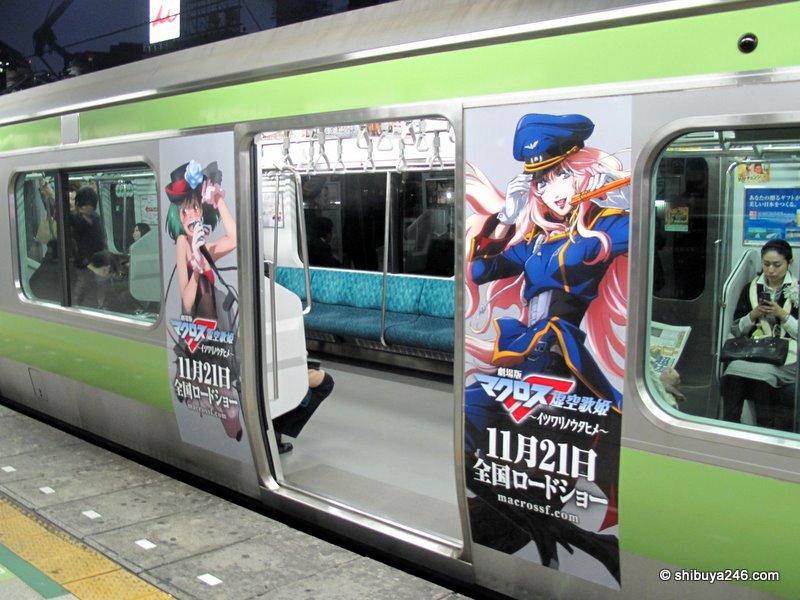 Looks like the train advertising is really catching on with many companies. Here is some colorful advertising for the new macross movie featured on the Yamanote Line, and a quick refresh on previous ads.

For those not familiar with the series here is an nice concise overview from wikipedia:

Macross (マクロス, Makurosu?) is a long-running series of science fiction Mecha anime, created by Shōji Kawamori of Studio Nue in 1982. The franchise features a fictional history of Earth/Humanity after the year 1999. It consists of three TV series, four movies, six OVAs, one light novel and five manga series, all sponsored by Big West Advertising.

Within the series, the term Macross is used to denote the main capital ship. This theme began in the original Macross, the SDF-1 Macross.

Here is a quick trailer thanks to SteelLer on YouTube.

Anyone planning to see this? Can you see it in your country anywhere or do you have to wait for DVD?

Did you also notice that the Macross F commercials on the JR line are lined up at the doors that coincide with the ” Electric district ” stairs/escalator ? I just noticed that today.

But no, not going to watch this. For one I didn’t really like Macross F that much aside from three episodes.
Which for a series of 26 .. isn’t alot to go on really. It just didn’t really have the good old Macross spirit to it.
Hell, the much criticised Macross 7 had more of the Macross spirit with it even tough it came out in an era of cheesy shows (G Gundam etc.) It was mostly that they didn’t know which direction to take it.
There was the cold hard military angst (episode 1 mostly) , the high school life drama, the un-needed amount of moe;things all chucked together with trying to replicate old Macross scenes to a great extent till it started to feel like they didn’t have any original idea’s at all.

As it is, it looks like this will mostly be a compilation movie with at most 10 minutes of new animation chucked in.
So even to the fans .. meh ? I do love the movie posters with Sheryl on it tough 🙂

Also Anime doesn’t really come out domestically in Europe with the exception of France; so it’s either on DVD and make it a US import so to have it subbed; or import it from France with Frence subs ..

Gundam Unicorn OVA however is a different story. That will be a simultanious WORLDWIDE release on DVD and Blu-ray. I am getting the Blu-ray for that on Day 1 ^_^

yes, I think seeing the ads was enough for me at the moment. Will think about it when DVD comes out 🙂

Only in Japan you can find this kind of ads… Great stuff!

Haven’t watch the anime yet but I will someday , to really be an Otaku .

RT @Shibuya246: Macross Frontier Movie, Japan Anime | Shibuya246 http://bt.io/AQGl
Seems like everytime you go to the train station there’s another product being advertised on the trains, eh? But you couldn’t ask for a better way to advertise with all the people that use the trains everyday. I wonder if people just ignor it ,seeing it everyday or do they actually pay attention to it. I know i probably would, seeing I’ve never been there. I remember when the the 1st. series came to America back in the late 80’s early 90’s was Robotech, with Rick Hunter and Lin Minmai, that was my 1st experience and it was pretty good for back then. I don’t know how they keep coming up w/stories for it, cause I think they’ve gone through every scenerio, don’t you think? I’ve even got one of the movies on VHS tape has the word waltz in it,can’t remember the rest.
This has beeen another great article. 🙂