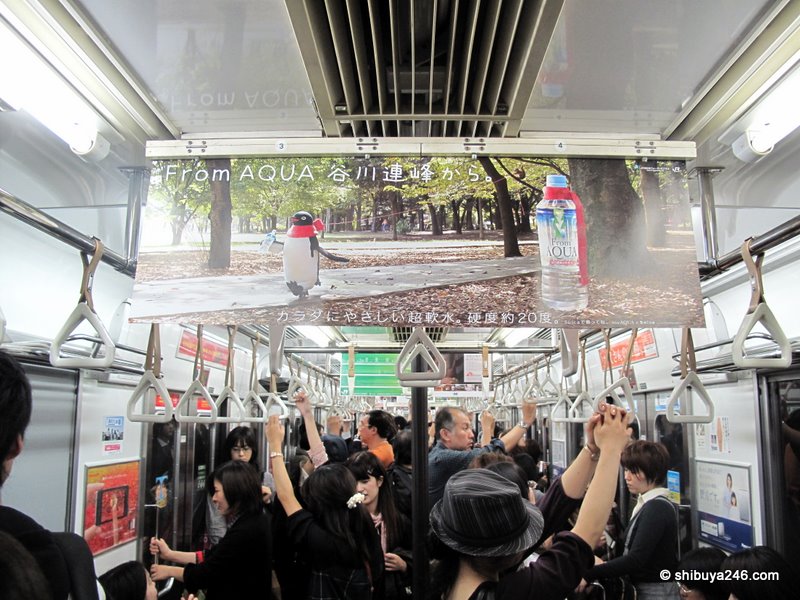 SUICA, Super Urban Intelligent Card, was introduced in 2001 and has steadily increased in its functionality and user base. Now most Japanese commuters in Tokyo use SUICA to swipe through the ticket gates and go to work. You can also use it to buy drinks from vending machines, candy at kiosks and at many convenience stores.

Mobile SUICA is also convenient for buying tickets through your mobile phone.

Since changing over to the metropolitan area IC Card system, SUICA now has over 70,530 stores that can accept SUICA payments. They have also issued almost 30,000,000 tickets. That’s a lot of tickets!

From wikipedia on Mobile SUICA:

Since January 2006, a version called Mobile Suica has been incorporated into mobile FeliCa wallet phones by Japan’s mobile operators. This system includes Java applications to manage the Suica function in the mobile phone, to recharge the Suica card stored in the mobile phone, review the stored value and perform other functions via the mobile phone. An enhancement for 2007 will allow for Suica charges to be added directly to the phone bill, eliminating the requirement to constantly add to and monitor the remaining balance.

In a further article I am going to look at SuiPo or Suica Point system.

I will have to check if I can use mobile SUICA on the iphone. Anyone tried it?

Face Masks – How do you choose?

RT @Shibuya246: JR Suica Adverts, Japan Marketing | Shibuya246 http://bt.io/XQy
That sure is a popular co. You’ve got it made, all-in-one card 🙂 tickets snacks and drinks. And that’s a lot of tickets sold. Next maybe food purchases at restraunts, what do you think? Don’t think it would work over here, only for you guys in japan, who knows maybe something like that will catch on over here.
Better get to bed not used to being up this late, almost 1:00 AM CST.

I have heard about this system in a video which actually makes Japan a very Futuristic Country with the use of SUICA .

Wouldn’t mind doing it in my country but still getting use to using Credit Cards instead of Cash .

But what would happen if someone steals your phone and the thief is using the SUICA ticket . Wouldn’t it be very Dangerous !!! Then again , Its Japan and it has a very Low Crime rate ^_^

Went to Tokyo for the first time last year and I *loved* the convienance of the SUICA card.
Fill it up with some money, and used it primarily trough public transport but it was so handy not having to have
to fiddle with small change to be able to purchase small things like drinks.
It even works in taxi cabs ! But that probably requires more than average credit on your SUICA card which you’ll lose .. if you lose the card.

In my own country (Holland) they have started using a simular chip based card since last year called the “OV Chipcard”
Specifically meant for just public transport at the moment.
Interestingly enough; it got hacked during it’s first trial year (people figuring out how to easily add infinite credit on them) and it’s been delayed.. tough now the system is back in full force and not nearly as pleasant or effective as the SUICA card.

For one you can’t use it for small purchases, and the check-in/check-out gates sometimes do not work.
For example checking in anywhere, will basically deduct 4 euro’s from your card as a base cost.
When you exit another station it will calculate the value and automatically deduct say the fare which could be 1.50
However, if in the bus or metro the exit gate doesn’t work the card will have -4 euro’s permanently deducted from you ! Other problems include the Chip cards with paid subscriptions for 1 year of travel (worth thousands of euro’s) going BLANK if you swipe them at the wrong gate (of a different company) and they all look alike !

No, Holland is still nowhere near as convienant as Tokyo with it’s SUICA card.
I think if I remember right PASMO was a rival card to SUICA in Japan.

The SUICA system here is awesome. The fact that you can use it not just on the Metro and JR lines, but also 99% of the private railway companies , all the buses, all those shops you mentioned and also ( for whipcrackers benefit) a lot cafes and restaurants ( usualy around the station areas ) is a testament to its appeal.

When I see people buying paper tickets I wonder why they don’t have a SUICA. I’d love to ask them.

PASMO is not really a rival since the systems are almost totally compatible. ( somewhere on wikipedia there is a list of differences) . PASMO is issued by the private railway companies while SUICA is issued by JR.

You can also use it store your Shinkansen tickets on, though I have never managed that part yet.

If you have a regular season ticket on the card it prints the expiry date on the card, and when you renew it , the machine rubs out the old date and writes a new one!

The fact that you can use it like cash means it is far ahead of the equivalent in the UK the Oyster card.

You can register you SUICA card, so even if you do lose it you can get the card cancelled so that the thief would not be able to use.

Thanks. Good comment. 🙂 For a while Sony was doing well with its EDY digital money card, and Visa have tried to push with their digital payment card, but SUICA seems to be the winner in the race at the moment. 10 years from now, we will all look strangely at those buying paper tickets or reaching for cash to buy candy at the kiosks. Just like mobile phones have taken over so will digital payment for small price goods.