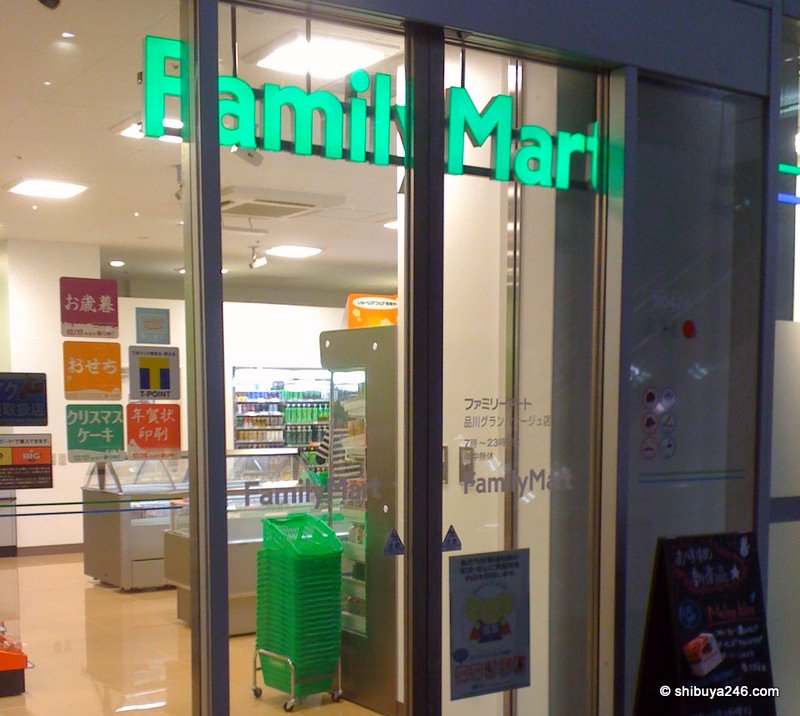 It is often talked about by visitors how clean and how honest they find the everyday Japanese. Business can get a bit murky sometimes, but out on the street there are a lot of good well meaning people around. Friends have told me about how they had passports returned that had been left on a bus, and handbags returned with everything intact.

I just went down to the local Family Mart and picked up some supplies. An hour later I happened to go back to the same store because I had bills to be paid. It wouldn’t be a conbini without being able to pay your electricity, phone, gas and taxes all in the one place, right?

As the girl behind the counter was serving me she reached under the counter and pressed a buzzer. I was starting to think, “Is this a hold up?”, when I realized a queue was forming and she just wanted to get some help with serving for the other customers.

Then she said to me, “You are the guy that just bought the purin right?”. I said “yes, sure”. to my surprise, she went to a cabinet opened it and produced a 1,000 Yen note. “you dropped this when you came in before so here you go!”. Wow, I couldn’t believe it. I hadn’t remembered dropping any money, but this is definitely good honest service.

Thanks Family Mart. Have you ever had anything returned that you thought would never come back?

Wow, that’s awesome. I’m not sure how many stores I live close by that would have people who would do the same thing.

Once on a 747 commuter flight from Osaka to Tokyo I left behind an MP3 player. I contacted the airline the next day and it was returned to me within 36 hours. I have left behind things on US flights which I didn’t even leave the airport and it was missing(stolen) within minutes.

In my country unless you find someone absolutely honest, what is lost is lost…
I personally returned a wallet full of cash and other important things, the girl wanted to split 50-50.

I just wanted 0.50€ for the bus ticket to go and give her back.
It was embarassing, as she caught my arm and put money in my jacket’s pocket.

Its Amazing How Honest people are in Japan . If this Happens in Malaysia , they would just take the money for themselves .

Some people are Honest and Some Don’t .

I lost My Phone the last time . Then , I called My own Mobile Phone and to my surprise Someone replied and said That I had left the phone at a Japanese Restaurant , That i had eaten . I claimed the Phone from a lovely Gal and I said ” Domo Arigatou” .

Lucky you! I forgot my camera in a Zipcar here in NY and no one returned it to me and I lost an iPod when I parked my car in a garage…. But I got my whole bag back in Tokyo after I left it in a restroom which had my wallet, my passport and my Shinkansen ticket in it! The most amazing thing was that it seemed no one “dare” to use the restroom which I left my bag on the hook! Girls waiting on line were happy to see me get my bag so they had one more room to use. I didn’t realized how honest people are in Japan until I moved to NY, and now I miss it very much!

that’s funny. Maybe they thought you had reserved the seat? 😉

RT @Shibuya246: Japanese Honesty, Japan Conbini | Shibuya246 http://bt.io/RVk
Now that’s what you call pure honesty.:) You were very lucky that you were remembered by the clerk. That’s #1 in my book. I sure am glad that the people in Japan are like that. When I worked for Walmart as a Customer Service Supervisor, you wouldn’t believe the amount of phones,ipods, wallets and money that people would loose, also many many credit cards and other assorted identification forms. It was amazing that you got yours back. Gotta keep closer track of what you have in your pockets and what you are carrying, it’s easy to get distracted.
This conbini looks like a perfect place for the next conbini monday post, what do you think?

I think that would be a great follow up. Conbini Monday will be on from the Family Mart in a few days 🙂

I had a similar thing happen to me once, in Saitama. I went to a Konbini ATM and withdrew 20,000en, however in my slightly intoxicated state, I forgot to take the money from the ATM. After walking for about 20 minutes, I realised, and sprinted back. Apparently the ATMs have a feature where if the money isn’t taken fast enough, it will be automatically ‘sucked’ back in.

I told my story to the guy behind the counter, he made a quick call to SMBC, I verified my ID with him, and the 20,000 was credited to my account.

I guess the point here was that there was 20,000en sitting in an ATM, and no one took it…. Gotta LOVE Japan 🙂

yes, not too many places you can leave $200 hanging in the open and actually get it back.

For Canada, it’s half half. there are such lovely people but there are incredibly greedy jerks too. I’ve seem kind acts, but one time I was walking home and there was 20 dollars on the sidewalk. I literally stopped because it was between my legs when I saw it. I looked around to see if anyone standing by had dropped it, and I slowly bent over to pick it up. But this guy (a student, early 20’s, caucasian just for a random description), started RUNNING toward my shoes. He was too late though as I had it in my hand by the time he got to me, and he just want “awwww” in this sarcastic tone and walked by.

How desperate are these people for money? We were standing in front of a row of houses, what if a kid had dropped it? It makes me sick sometimes. I actually walked up a lady standing nearby and she just said “nope I didn’t see anybody drop it, it’s yours now.”

Keep up the posting man. If I ever end up in Japan, let’s do lunch.

Wow lucky, wish it was like that all over the world.

I can top all the honesty stories. While in Osaka I could not help noticing a new Ferrari parked in front of a grocery store near the city’s busiest intersection. It was unlocked with the keys in the ignition and the engine running. I came out of the store about fifteen minutes later and a small crowd of young guys had gathered in admiration around this strikingly beautiful automobile. It was still running. I guess the owner could afford the gas, Anata des? (Is it yours?) ,I was asked .feeling flattered that I appeared so affluent. I e –well no it wasn’t….. Curious, I hung around another ten minutes just to see if the owner would show up.. He did with a little girl of about two who was just old enough to manage an ice cream almost as big as she was. With a smile and a wave, he drove away………