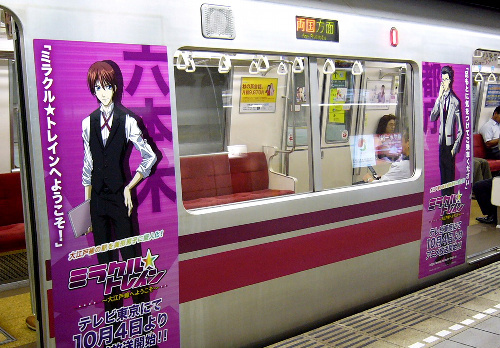 Ikemen are making their debut on the Japanese subway’s Oedo Line. A number of major stations are getting their own characters such as Roppongi’s Fumi-kun, Tocho-mae’s Saki-kun and Tsukishima’s Izayoi-kun.

The project is called “Miracle Train” and involves the Ikemen characters being displayed at the stations and on the trains. Maybe I need to get down to the station and grab a few live shots?

The term Ikemen has been popular in Japan for some time, meaning good looking cool guys. Is this phrase from いけている面, literally meaning ‘good looking face’?

The train project is connected with the upcoming TV Tokyo anime series that will start soon called Miracle Train.

Here is the TV tokyo page for it and another site called http://www.miracle-train.tv/.

Anyone heard anything good about this anime starting on Oct 4, 2009?

More great adverts for things in Japan. Have never heard of this 1 before. Might be popular w/the girls with all the guys for them to oogle after, lol:) The subbed language was in looks like spanish, not quite sure though. Might have to givve it a try once it comes out in subbed english. RT @Shibuya246: Ikemen Train, Japan Anime | Shibuya246 http://bt.io/FaO

yes, I couldnt find anything on YouTube with English subs yet

I didnt heard anything about this, but I’ll probably watch it, the concept seems interesting. Didnt know bout those posters in stations though.

LoL. So that’s the origin of “ikemen”
I thought it’s from “ikeru” (行ける), in the meaning that they have a passable face (good enough to try and hit, for the girls)

The anime is available in English fansub already through the BitTorrent distribution.