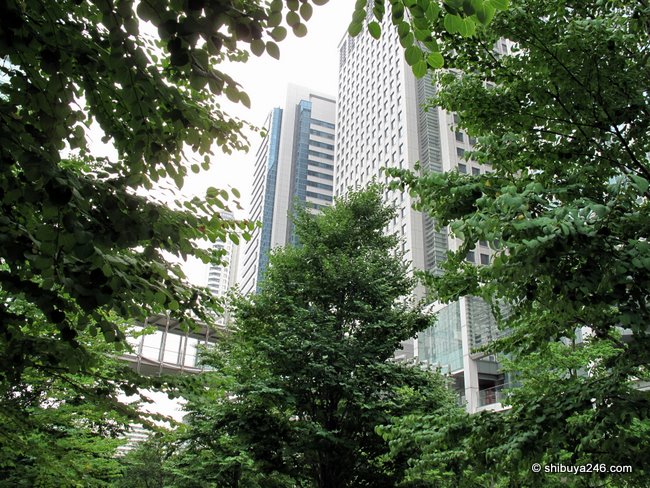 Shinagawa is one of the major stations on the Yamanote-sen. It also has platforms for the Shinkansen, Narita Express、Tokaido-honsen, Shonan-Liner and other local trains, JR and Keihin-kyuko lines. In total it has 15 JR regular platforms, 4 Shinkansen platforms and 3 Keihin-kyuko platforms.

The Takanawa Side of the station has been long built up by Seibu and their Prince Hotel group. The East or Harbor side had for many years been hard to access and vastly unpopular. It was seen as an area of land where factories and warehouses stood which the average person didn’t need to visit.

With the end of the Bubble years, the large tracts of land which Japan Railways owned throughout the country were designated for development and sold off to repay JR’s mounting debts. The East side of Shinagawa was one such area.

In 1994 the Shinagawa InterCity complex was built, housing convention facilities and office space and in 2003 the Shinagawa Grand Commons project was opened housing major corporations offices, such as Canon, Sony and Obayashi-gumi. InterContinental also has a hotel in one of the buildings.

Whilst the office buildings soar into the sky, a nice feature of the Shinagawa Grand Commons / InterCity project is the park area established in the area between the main buildings. The area is well designed with plenty of greenery and water features.

There is space in the middle for small orchestras or stage performances to take place with plenty of room for spectators to take a break from the hot summer and soak up the cool breezes that pass through the park.

On this weekend, I went to see the ‘Live in Tokyo’ festival being held in the Shinagawa Grand Commons Park. The event is being held from August 8 to 16, 2009. It covers a range of artists and allows the public to experience concerts in the Park.

There was also a flea market in the park which seemed to be attracting quite a bit of attention.

The architecture is not stunningly different, but all of the buildings have a sleek look about them which still seems to retain a friendly feeling. Rather than hiding people away inside the building there are walkways and multiple entrace-ways to keep a flow of traffic within site.

There are also some nice reflection patterns to be seen from the park and the walkways. One building seems to mirror off the next without appearing too heavy and close.

This symbol on the ground in the park, shows the boundary line between the 2 properties.

Quite the combination of glass, concrete and steel. All making the relections stand out even the more. The park setup makes it even nicer for people to be able to relax and have a good time. The refllection of the surrounding buildings is something I don’t see much of, living out in the sticks. At least the people working in those buildings can see what’s going on. Something like that helps out during the work day.
Great bunch of photos

This is a really well written article. I’ve always wondered about the Shinagawa area as I ride by it on the train or transfer to a shinkansen there. Beautiful photos. Thanks for posting this.

Thanks. Glad you enjoyed it. I had a great day out here.