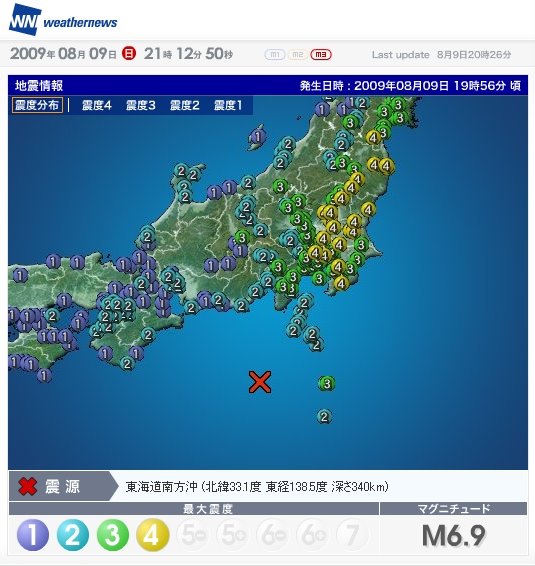 Just had a strong earthquake here in Japan. Tokyo shook strongly, but everything looks fine now. The center of the earthquake was at sea, 340 kilometers down, but its effect was felt firmly on land.

In Shibuya, my apartment building was swaying for about 30 seconds. I turned the gas off and tried to find the news on TV, but all they were reporting was the news on Sakai Noriko being arrested. Immediately I felt relieved that it could not be a major earthquake. The Sakai Noriko news obviously created a bigger stir than a mere 6.9 magnitude strike.

Future Worries
Japan experiences many earthquakes every year and most are not too strong. The one everyone is worried about is if a huge earthquake were to hit the center of Tokyo.

Whilst most apartment buildings and office buildings have been constructed under some strict earthquake resistant guidelines, there are still many older structures which may not stand up so well under the ultimate stress test.

I hope that we don’t have to experience any major disaster that would cause loss of life to many.

Past Earthquakes
There have been some notable earthquakes recently that have had a large casualty figure. The Hanshin (Osaka, Kobe) earthquake in 1995 was one that stands out. There have also been a number of quakes North of Tokyo in Niigata-ken and also in Hokkaido.

The last time Tokyo saw a devastating quake was in 1923 when it was hit by a magnitude 8.0 strike. Here is a good write up on that earthquake and another write up with some photos.

According to ReportingAsia.com in their recent July 2009 article:

The Pacific plate also descends under the Eurasian plate on which Tokyo sits. New work suggests that a chunk of 60 miles long and 15 miles thick has broken and got lodged between the two ocean slabs. This change might result into the most deep-thrust earthquake in Tokyo’s history since 1855, turning the city upside down. An estimated 7.3-magnitude earthquake will prove to be the most expensive calamity in the world history.

RT @Shibuya246: Japan Earthquake | Japan | Shibuya246 http://bt.io/58a
Have never experienced an earthquake before.
Glad to hear everyone is okay. Was it like a Shake Rattle and Roll?
Lately just west of me in the FT. Worth and the surrounding communities they have been experiencing tremors from all the drilling companies are doing going through the deep shale layers underground. For those that have never experienced anything like this, it can be quite terrifiying.
Don’t know what i’d do if one of those things hit Texas
Another thing, what’s with all the pop idols and things surrounding deaths, drugs and the whatnot.
And this makes for bigger news,just don’t understand.
till conbini monday and Rilakkuma,
Btw how did Rilakkuma hold up durring the earthquake?
Peace,out.

Great to you know you’re alright.

Thanks for checking in 🙂