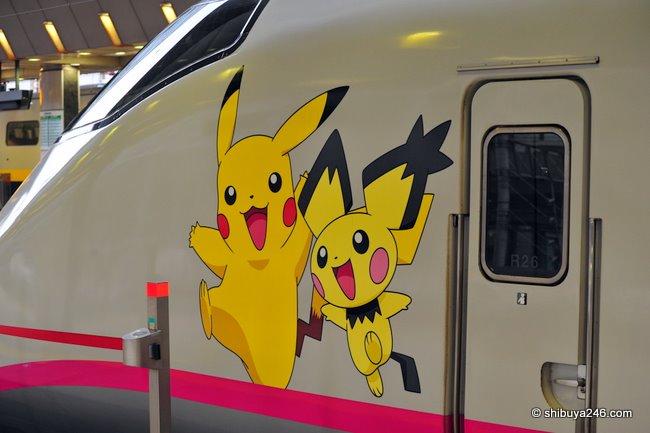 The Pokemon decorated Shinkansen series was started last year during the summer holiday season and became a popular success with families.

I went down to Tokyo station to have a look at the trains. I was able to get into the station and up on to the Shinkansen platform with just a ‘platform ticket’ 入場券, that only cost YEN 170. That was a cheap way to take a look at the Pokemon train without riding it.

I only had my long lens 70-300mm with me, so it made for some difficult positioning. The platforms generally have gates and barriers to stop people falling into the train tracks which also meant the photos were not just of the train but also the obstacles. It would be nice to photograph the train away from the station maybe.

This year the number of trains decorated with the Pokemon characters has increased from 7 to 13. The trains operate on the Tohoku, Joetsu, Akita, Yamagata and Nagano lines until September 23.

Here is some video from YouTube of another Pokemon Shinkansen

If you are thinking of booking a Pokemon train then it is best to check with JR East what times they will be running. The schedule of their departure/arrival is only released a day before, but it may be possible to specify the train if you are booking a package tour.

pickachu!@ I choose you!

Thanks. Glad you liked it. The themed trains are a lot of fun for all the family, including adults B)

Great photos!! Man I can't wait to go, just a few more weeks. Just a note, the pokemon on the watermelon is a pichu not a pikachu.

Thanks for the note. I fixed this up now. Good job you were looking out 🙂

I miss Japan, they are the only ones able to do that kind of stuff !!

I checked out oinktentacles site and those are some cool looking train designs. The one for the JR Yamanote withthe zipper on it makes you think of how they push everyone in at rush hour times. Wouldn't want to be caught in that zipper. A train that goe to Universal Studios w/spiderman cool. Also the one with Galaxy Express 999 one of my fave animes. Now we need a train with Rilakkuma on it , so the tired salaryman and ladies can relax with the original "Relax Bear". What do you think? Who do you have to talke to about doing this/ Can we start a petition for Rilakkuma?:D
More great photos as usual. You take some of the best photos around imo.

I have heard of a Rilakkuma Bus at Tachikawa but not a train. That is a good idea. If I get chance I will go down and take the bus. It is about 1 hour away from here

very very true. this just makes it all the better 🙂

Glad you enjoyed. I'll be on the look out for more 😀

When I take some more pictures of trains I will look out for him. 🙂

trying to update the comment system to something that will work a little better. sorry 🙂

Japan's obsession with everything cute has relapsed in a new dimension. Only and only Japan can make this happen. I sooooo like it ! Wish I had the chance to ride these Shinkanshens… whatever. Thanks @ Shibuya246 for sharing these beauties. You have been as nice as always.

Next time my wife and I go back to visit her parents and we take the shinkansen over to Kobe to visit her brother, I’ll have to see if I can schedule it for one of these character trains.

Isn’t the TMV from Pokemon X and Y based off of the Shinkansen?