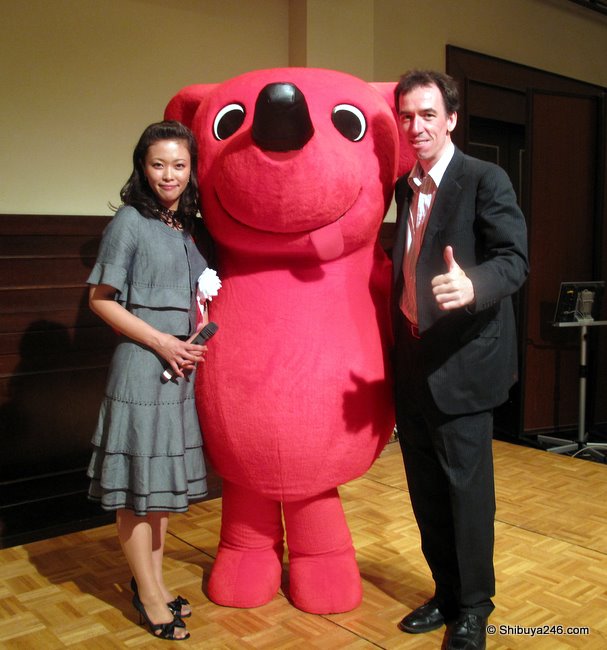 I was invited to a party given by a friend who is a Council Member of the Ichikawa City Council in Chiba. Maki Namiki’s blog can be found here detailing her activities. She is also planning to start using Twitter soon joining other Japanese Politicians who are using Twitter regularly.

Cheeba-kun
In addition to the official speeches, Hawaiian Hula dancing, a magic show and live musical performances, Cheeba-kun made an appearance at the party which got everyone out of their seats to take photos and join in the fun.

Cheeba-kun (チーバくん) is the official mascot for the 2010 Yumehanto Chiba Kokutai Games (ゆめ半島千葉国体). These are a National athletics meet to be held between September 25th, 2010 and October 5th, 2010.

The Mobile suica page in Japanese has lots of information but I could only find a Japanese version.

Cheeba-kun information on the web

Official photographs, copyright issues?
One thing that surprised me when writing this post was the difficulty in finding official photographs of either the Suica Penguin or Cheeba-kun. The characters were created to publicize events and services. If the character does not get shown around and viewed by the masses then the campaign will not be effective.

It would be good to see an easy applicable copyright license for users to promote the character that is promoting the service in an effort to raise public awareness for campaigns.

Pretty awesome photo, and interesting learning about mascots such as these. I think the tongue hanging out gives some kind of added effect..lol. Makes the character fun somehow. But such skill though! Magic tricks, musical performances, and more! Sounds like quite the mascot. And you're right, the characters should be more easily found amongst the public if they want to promote them.

It's good to see all the different things being promoted in Japan. But what will be the next one? Just how many mascots promote products in Japan? Seems like every time you turn around there's a new one. Don't ever see that many here in the states. Actually the big thing for mascots here is the professional sports teams, and every team has one. Would like to see more things here promoted here like they are there.

Very true. There is a mascot character for pretty much everything. Have a look at post on http://tokyo2016today.com about soccer to see another mascot in action

Thanks for the link. Seems like everything and everyone wants to promote something. It looks like that little girl in the 1st photo doesn't look to happy to be up there, but the little boy has a great big smile.That Japanese water sprite fellow is quite interesting though, all the more to promote the great country that it is from.

Oh yeah btw nice photo of you, Councillor Namiki and Cheeba-kun. Forgot to mention it before.