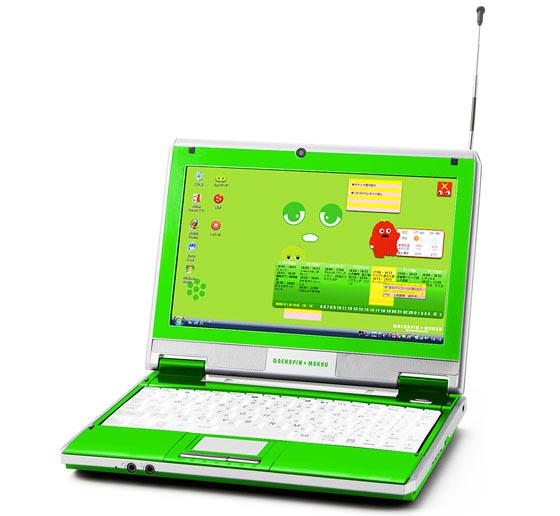 Bandai Networks has released a notebook PC for kids based on the popular San-x character, Rilakkuma.

The Rilakkuma Mobile Note PC will only be sold in Japan. Orders are able to made from today on via LalaBit Market’s online store with a price tag of YEN 79,800.

The Rilakkuma Notebook is in addition to the February 2009 release of the Gachapin Notebook with similar specs. Both of these machines are limited release models.

Thanks to Baka Brain on Twitter for tipping me off about this PC release. Much appreciated.

Love it! Shame it’s not a Mac though.

A new product for Rilakkuma to endorse=EPIC WIN! Now he needs to get his own blog,you'll have to help him right? I'll be the first to sign up. Rilakkuma: World Dominator! To bad it's only available in Japan though. I still want one though.
Have a great weekend.
Ja mata ne

I think it will be limited to 500 units so it's going to sell fast. Maybe a Rillakuma theme you can download for windows would be good.

yeah a rillakuma theme would be great. I like the case, if it could be purchased separately I would order it straight away. However i think 79000 ¥ for a netbook is a little bit expensive even if its a limited edition, don't you think so?

Limited editions are always going to be a little bit more expensive. The specs sound pretty ok, but under $500 would be a good price point

That sounds like a winner for me. Anything for Rilakkuma

I really want it.

how much? I really want it,

I really want it… Rilakkuma lovers…