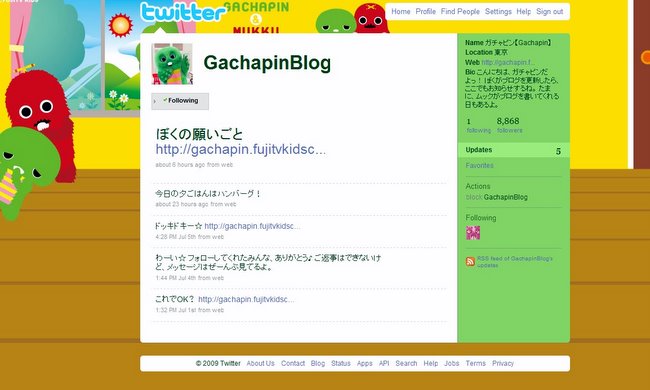 Social Networking in Japan
Whilst there are many popular social networking sites in Japan, including Mixi, GREE, Ameba, Livedoor and more, one site from overseas that is starting to create some interest in Japan is Twitter.

Twitter Movement
Twitter has been highlighted on the main TV News programs in Japan recently with coverage of the Iran elections, highlighting how news can travel quicker and easier through Twitter than more traditional news media.

A story like the Iran election is useful to momentarily highlight what Twitter has to offer, but when Japanese TV characters start signing up for their own Twitter account you know a social movement is just beginning.

Gachapin, the popular Japanese kids character (the one that most resembles a Barney) from Fuji TV, starting using Twitter at 1:32pm on July 1st 2009 announcing to its followers such gems as “Today’s dinner was hamburger”

What is interesting to note is that Gachapin has already amassed over 8,800 followers in just 1 week. Normally it might take an individual a year or more to reach these numbers. Whilst there are many American popstars and celebrities who have over 1 million followers, Gachapin is certainly off to a hot start.

When you consider that Gachapin is primarily limited to a mainly Japanese language audience and his fan base is basically young kids, that 8,800 number starts to look quite impressive.

I am sure that by the end of the year those follower numbers will be climbing significantly. Here is the link to Gachpin’s Japanese Blog.

For those that don’t know Gachapin, wikipedia has a great explanation about his origins. Here is a small excerpt:

The first season of “Hirake! Ponkiki” had the setting in which the Captain traveled to a southern island and brought back an egg from which Gachapin hatched. Gachapin had quite a shy and easy going personality at first. Then he became quite an adventurous character and went on to attempt such sports as skiing, rock climbing, hang-gliding, scuba diving, karate (1st dan in kyokushinkai), gymnastics, bowling, figure skating and even an adventure in a space craft.

Each story was triggered by his interest in environmental problems and enthusiasm for space crafts. On each wrist, Gachapin has seven energy balls that are the source of his bravery and power. It was said that the reason for Gachapin’s phenomenal reflexes was due to the carbohydrates inside these balls.

Another character from the same Fuji TV Kids Club that has started a Twitter account is the Lollipops. The Lollipops are 3 pink bears who made their debut to their favorite song (Crazy For You) from the popular 70’s singing group, Candies. Here is some information on Candies from wikipedia.

Here is the announcement from Fuji TV that both of these characters had started Twitter accounts.

Twitter has become the mainstream for finding out who's doing what, and where nowdays. How does everyone keep up with it? But it's great to know that the Japan is taking a liking to the Twitter thing, it'll give them the world wide appeal. Now the kids will want their own phones so they can tweet. That video of the group Candies was priceless….ah the 70's…
my high school teenage years. If only I could turn back the hands of time. Sorry for rambling…bows:S
Got all the photos taken care of yet?
mata ne

Very interesting, I can never find Japanese twitter's but now I can, thanks!

I'm going to put a list of well known Japanese Twitter users up as well. Let me know if you have any to add

It feels like you can write more in Japanese than English on Twitter. In Japanese many words can be typed with 2 kanji. In English it might take 7-10 letters.

I agree with that point. I rarely tweet in Japanese (as I have so few followers who reads Japanese) but I can say more when I write in Japanese. Thanks for the follow by the way!

You're welcome. It's nice to follow and meet people from varying backgrounds 🙂

It is nice to see twitter expand in Japan. I am a twitter addict and I use social media to reach out the public. Twitter is a great way to communicate with people you don't know. I would twitter in Japanese more if I had a bigger Japanese following crowd.
http://tsuvo.com/

Gachapin is racing away to over 50,000 followers and a lot of those are new to Twitter. Now is a good time to connect with them all and see what they want to tweet about

I think the Twitter client landscape has really changed in 2010. New approaches and design strategies have yielded some remarkable new Twitter clients. One in particular is TvvitterBug. It eloquently combines simplicity with great functionality and entertaining animations to give you the most out of your Twitter experience.

TvvitterBug 1.3 is just released and available on the App Store. This release brings together the culmination of all the features, capabilities, and functionality most sought after in an iPhone/iPod Twitter App, including:

1. All of the power you want, without the complexity you don’t.
2. Five (TvvitterBug exclusive) user-customizable Tweet Views.
3. Up to Five user accounts easily accessible from any view through a simple drag-down menu.
4. Persistent Tweets between launchings so you can view your tweets anytime.
5. Double-Tap Instant Update to easily and quickly refresh your tweet views on demand.
6. Built-in Photo capabilities to add photos directly to your tweets.
7. Built-in Translation support using any of the state-of-the-art web translation engines you choose, such as Google Translate, Yahoo Babelfish, or Promt Translator.
8. Built-in Web Access to view tweet embedded pictures and other URLs.
9. Editable User Profile, including setting a new Avatar picture.
10. Support for both “Fixed” and “Editable” Retweets – your choice.
11. Landscape support for both Views and Keyboard.
12. Automatic Language detection and display – great when you’re surfing!
13. Push Notification support.
14. Automatic last-state restore on subsequent launchings.
15. It also supports Lists, Spam reporting, deleting tweets, follow/unfollow, favorite/unfavorite, search of Message, From, and/or To in any timeline, Search and Trends timelines.
16. The same ease-of-use and lightning fast operation as the original version.

Help me spread the word about the most fun and enjoyable Twitter app for the iPhone and iPod touch around. You can read more about TvvitterBug at http://www.tvvitterbug.com