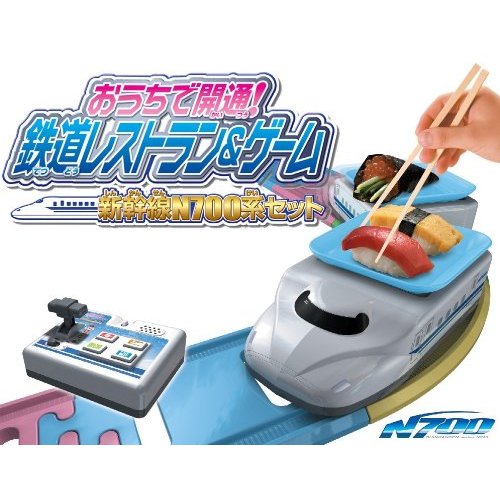 Epoch Co. (エポック社) have come out with a toy train set that can carry sushi around a track for the kids to play with at home. The company has a previous train product that did very well and is currently selling a cooking toy. They decided this sushi train N700 series product would combine the success of these other two.

The train is modelled on the N700 series Shinkansen and comes complete with toy sushi blocks. You can change those over for real sushi but it might need to be small sized !

Photo source: thanks to wikimedia

The product is due to come on to the market at the beginning of July and will be available through Amazon Japan as well as other outlets. I cant find any information for English sites yet.

Here is what it looks like over on Amazon

I don't know how well something like that would sell over here unless your a train collector. Also I don't know how many kids in the states here like sushi,I for one have never had sushi before not a fan of raw fish but i'd probably eat the rice wrapped in seaweed. But back to the topic,sorry i start rambling, for over there it probably be a hit, actually looking at the size it would be a perfect fit for Rilakkuma.
Well it's late time for bed

well i think a lot of people would like it here if the purpose of it was changed to like condements train so you never have to ask someone to pass the salt HEHE!

OMG Id buy one in the drop of a hat! It may be that i'm total "Japanophile" but a train with food can never be bad…especially sushi

maybe I should set up a store and start stocking them 🙂

Wow, I so want one! Would be great for parties.

It’s definitely an interesting product. I think it could be fun to play around with and to come up with different ways to use the Sushi Train. I found some videos and commercials for the train and posted it up on our blog. If you get a chance check it out: http://funcfash.com/2009/07/epoch-sushi-train-diy-conveyer-belt-sushi/

Shame it has the train and in,y holds two plates..a bug lame could be a bit more fancy