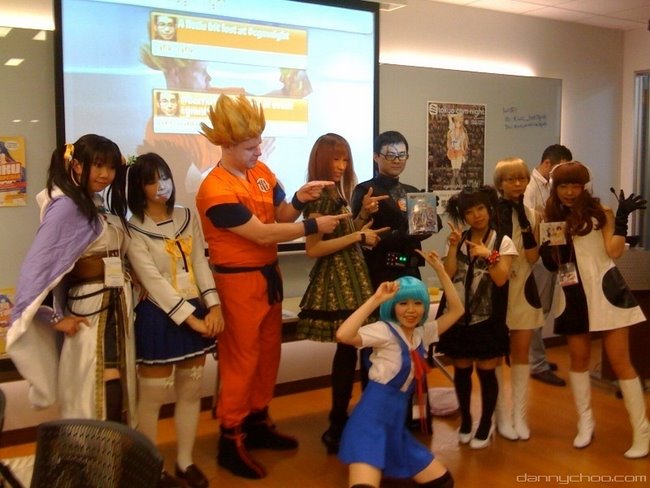 CGM Night 5 was held recently at the KDDI web communications head office in Tokyo. It was my first time to attend and thanks to Danny Choo and Andrew Shuttleworth, it was a very enjoyable night.

I am a bit late in writing this, but can definitely say that late does not mean ‘bad’. The event was very entertaining as you can probably tell by the photos, and it was also a perfect way to network with people who you don’t normally get a chance to meet face to face. There was no particular agenda at the CGM Night, and this allowed people to mingle and find conversations around the room. I met a number of interesting people, including a group from Google who were in Tokyo as part of their internal Google career path program.

There was also a number of giveaways and prizes to be won, including these Firefox stickers and face towel. Interesting guests included a number of idols. The two below are Amano Ai and Mayu-chan from Cutie Pie. They are probably going to be performing at the next CGM Night, which is already being organized at another great top secret venue. Kind thanks to use of photos from Danny. You can see all of Danny’s photos from the CGM Night and his post on the events at Dannychoo.com

Andrew and Danny always put on a good event for CGM Night. Bringing people together so they can network sounds like an easy task, but a gathering of so many people in one location is tough. Thanks to both of you. If you want to know more about CGM Night, take a look at Danny’s post. If you haven’t been to a CGM Night before and live near the Tokyo area, I would encourage you to come along. If you can’t attend then don’t forget you can follow along on Twitter with live tweets and you can see photos on flickr tagged with cgmnight.

Hey I think i'm first today. Danny and Andrew always seem to put on a great show. It's great that all of you folks have a place to go and discuss and socialize. And of course thanks to Danny for all the great photos. 🙂 This time it looks like Danny and Andrew had more entertainment this time, and it looks like everyone was having a great time. Did you get youself a Poken? That seems to be a nifty little device to have that way everyones info is all in one. Did you win any of the prizes they had? You need to get Rilakkuma an invite so he can join in the fun, i'm sure Danny wouldn't mind having him along.
Well have a great day,
Ja mata neB)

Amano Ai and Mayu-chan are soo cute. I would die just to meet them in person once. Thank you very much for the photos :). Looks like you had a hell of a night. The mozilla firefox give away stuff looks good, but may be a little bit too much for just one person ^_^

they were very cute indeed, and very happy to talk with all at the event. A very god event 🙂

Yes, you are first up. nice work. no poken yet. I am holding out to get a free poken + hug if i see the sign 🙂