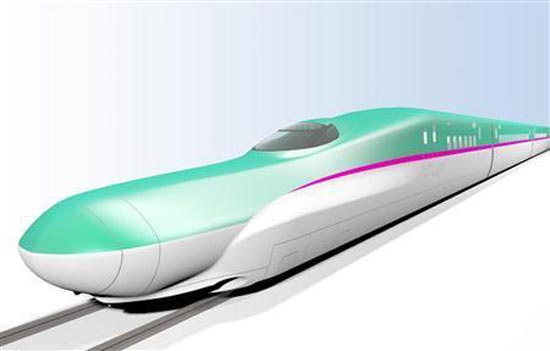 The first media test run of the new E5 Shinkansen was on the 17th June, 2009. The Sankei Newspaper had some good photos you can see. Click on the arrow buttons to see the rest of the photos on their site.

The E5 Series Shinkansen will run on the Tōhoku Shinkansen between Tokyo and Shin-Aomori, commencing service in 2011. The top speed of the trains will be 320 km/h.

If you are wondering where the E5 series fits into the rest of the Shinkansen lineup here is a guide from last weeks pen magazine article.

The starting point for the Shinkansen is in the top right hand corner, the 0 series brought into service in 1964.

Once the train is in service I would like to get some good photos.

For more of these photos, visit Muza-chan’s blog. This train looks like its well worth traveling on.

Last Weeks Yamanote Line Quiz
Following up on last weeks quiz, there were some really good answers with a few people coming close to getting a perfect score. It looks like Meitantei Conan may be of assistance to some and it is good to see that anime can be a good way to learn interesting facts.

Does anyone have a link to some video on YouTube that shows the Meitantei Conan episode with some of the Yamanote Line quiz questions? I remember seeing them showing a diagram of the trains all lined up between Tokyo and Meguro to explain the distance, but can’t remember where.

We’ll take a look at some more interesting railways and rail facts in coming weeks and will try to organize a quiz with some giveaways.

I think i first saw this on Jamaipanses blog if i'm not mistaken. Another great addition to the JR line of trains. And they do look very comfortable. If only I could be there…darn economy no job yet.:( Hopefully your next quiz will be overseas friendly, so I can participate, just love quizes w/giveaways.
More great info and photos Ganbatte!
Ja mata ne

Yes, the next one will be more overseas friendly as well. thanks 🙂