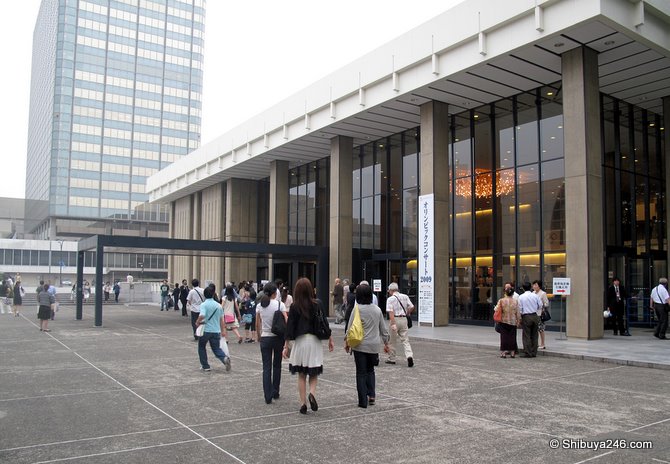 Sunday night, I attended the Olympic Concert 2009 hosted by NHK, at NHK Hall. With Tokyo bidding to get the 2016 Olympic Games, and the decision on that being announced less than 3 months away on October 2, 2009, there was plenty of interest in the event.

There was a table laid out with banners and flags to be signed in support of the bid. This was a popular area with everyone wanting to get their message included before the concert started. I managed to squeeze in and write a quick ‘Go Tokyo 2016’ message.

There was no filming allowed inside the NHK hall so unfortunately cant show you any pix of the atmosphere. The concert was a classical music concert with anecdotal speeches from a number of past and present Olympians.

There was also an introduction of some Japan Olympic training members who are currently enrolled as elite athletes to train for future Games in the areas of table tennis, wrestling and fencing. Looks like Japan is working on some new talent for the upcoming London 2012 Games and then further on to the 2016 Games.

It is great to see the city getting behind the Bid. As the time draws closer to the decision and the reality of Tokyo being a strong contender is felt, I am sure there will be more events that attract the public’s attention. If Tokyo is chosen for 2016, there will be a sudden increase in that support and the atmosphere will become very festive indeed.

Great photos – can we get some in the Flickr group for Tokyo2016
http://www.flickr.com/groups/tokyo2016/

will load some up.

To think I was 18 in 1964 that really makes me feel old,how about you?:) To bad no photos from inside,but kinda hard for a concert with cameras going off all the time.
I've got an idea why don't you make Rilakkuma one of the sponsors of the olympics he'd make for a great goodwill spokesperson:
Great
Spokesperson
Rilakkuma
Then the whole world would know who he is. He'd even make for a great mascot, yeah! lol
Have a great day.

nice thinking. I had in mind Gundam as the Ambassador for the Tokyo Games. Japan is well known for its robot technology. 🙂

I'd totally forgotten that it was quite so long ago since the Olympics had been in Tokyo. Let's hope they win the bid. Gundam for Ambassador: great idea, though I'm not sure how well he'd go down in an interview!

I’m sure all the Doraemon fans would approve 😉