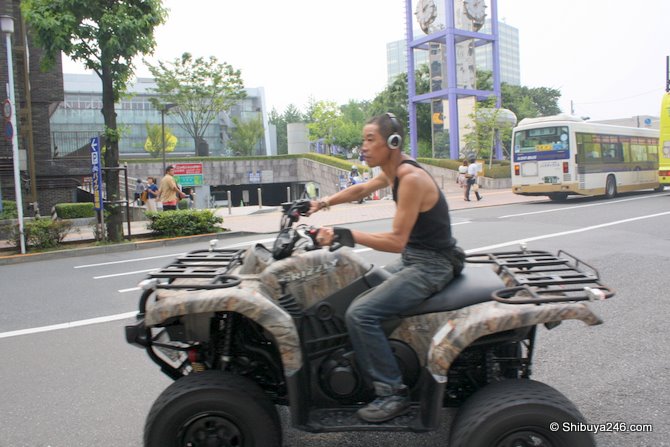 I saw some interesting transportation on the roads today while out and thought it might be worth sharing. I don’t know where this guy normally rides, but the terrain of the Shibuya streets is not that rough.

There are always lots of advertising trucks and buses out on the weekend. I think the government should consider asking them to pay a fee for using the roads when they are not carrying any people or goods at all.

This truck was promoting Kuraki Mai’s new single called ‘Beuatiful’. It will be out on June 10th 2009.

Here is a video clip for Kuraki Mai’s single, Beautiful

GREE must definitely think Shibuya has the right balance of its target market. In addition to covering the station with its adverts it also has trucks out advertising its service. Since one truck passing through the streets is no longer unusual enough to catch peoples attention, GREE decided three trucks would be better.

This adidas bus passed through Shibuya in the evening.

From side on the bus acted a bit like a chamelion. After taking the photo and looking back at the camera, I thought I had totally missed the bus in the frame altogether. I had to look twice to find it in the photo. Strange how a bus that big could blend in to the Shibuya landscape.

At least the next bus actually was carrying people as well as advertising a product. The popular sightseeing HATO bus line is promoting the singer Aragaki Yui on this bus.

Thank you so much for sharing those pictures with us. I just received Mia Kurakis new single today and love it :). She sings most of the themes songs for Meitantei Conan ^_^

I seriously cannot understand those people who drive offroad cars in the city O_o.

You are welcome. Enjoy that single. It's pretty good 🙂 I will get around to reviewing some Meitantei Conan stuff soon.

That's a great video. She has a verry sweat and melodic voice, so nice to hear music thats not shouted or with such jibberish that you can't understand what is being said. With not living in a big city, Dallas or Ft.Worth, I don't know if they do any of that kind of advertising. As for that first picture, it is definately an off road vehicle and that's where it should be,imho. Great photos and video, post more.
Ja mata ne

Thanks. will keep the camera at the ready for any more action.