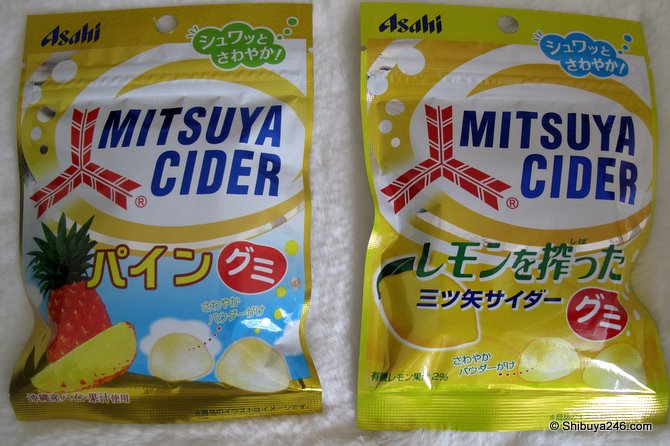 Mitsuya Cider has been a well loved Japanese drink since Asahi first introduced it in 1884. Originating from Hyogo-ken from humble beginnings, its fresh sparkling taste conquered Japan and is also popular overseas.

With such a long history it is not hard to understand that market demand has at times dropped for the product as the brand became mature and competing products were introduced. As you can see in this article by TRENDY magazine, July 2009 edition, the graph shows a drop in sales around 2002.

Thanks to some clever marketing ideas and some new product lines, Mitsuya Cider has managed to turn around the dip in sales volume and is now steadily picking up market share in the beverage sector.

Here is an advert for Mitsuya Cider by Aragaki Yui who we featured in volume 1 of the Shibuya Streets series.

and one with Kitano Kie

As well as bringing out new flavors such as Peach Mitsuya Cider, one of the big hits has been to bring out an ALL ZERO Mitsuya Cider product. This has proven a hit particularly with the younger female market.

Mitsuya Cider is not just about liquid in a bottle. There are also some great spin off products that can be found in your local convenience store in the candy corner. Have a look at these two items in lemon flavor and pineapple flavor.

Also, discovered at the Lawson convenience store this week, was this box of Evangelion 2.0 tissues. This is part of a promotion for the new production to be released on June 27th, 2009.

Here is a trailer for Evangelion 2.0

Evangelion 2.0 : You Can (Not) Advance (trailer)
Uploaded by Total_Manga. – Check out other Film & TV videos.

If you are interested to pick up some more convenience store goodies for Evangelion, have a look at this blog site.

… and some other related products for Evangelion.

So it's called cider but isn't made from apples and doesn't contain alcohol. Rather curious, isn't it ?

By the way, I love the expression "Combini Monday" ! It would make a great name for a band, or an album title. 😀

yes, its non alcoholic and its not made from apples. Its a carbonated (fizzy) drink with a refreshing taste. Some might say it is the Japanese version of Sprite, but that is not doing the drink justice. It has a really fresh sparkling taste.

"Combini Monday" is hot! Thanks for the vote of confidence in the name 🙂

hmm shibuya I wanted to know if that cider drink was really sweet? Did it contain a lot of sugar like sprite? Or was it just a really refreshing drink

It may have had sugar originally. The idea of the ZERO product is to reduce those calories. It does have a good taste. The bubbles seem to be bigger than sprite, and it is not as sweet.

Ohayo gozaimasu Shibuya,__well you must know by now that i'm a big fan of the conbini monday articles. It's a great way to start out the week reading these reviews.:D. My thoughts also a cidar not made out of apples. Sounds like a really great drink, I'd try it in a heartbeat!__As for the Evangelion products and the next movie coming out, it's great that a series that ended years ago is still as popular as ever. It's the series that got me hooked back in the late 90's even though the first ever anime that i ever saw was Astro Boy and Kimba the White Lion back in the 60's not even knowing what anime was at the time.__Well again great articles!!__See Ya____

Something must have gone wonkers on my last comment, didn't get credit for it ,could you check it out?
Thanks

Man, I love Mitsuya Cider. The regular flavor is great, but I also love the apple and peach flavors. The grape is also very nice.

There is nothing like a good Mitsuya Cider, cold from a can, in the afternoon heat of summer ! 🙂