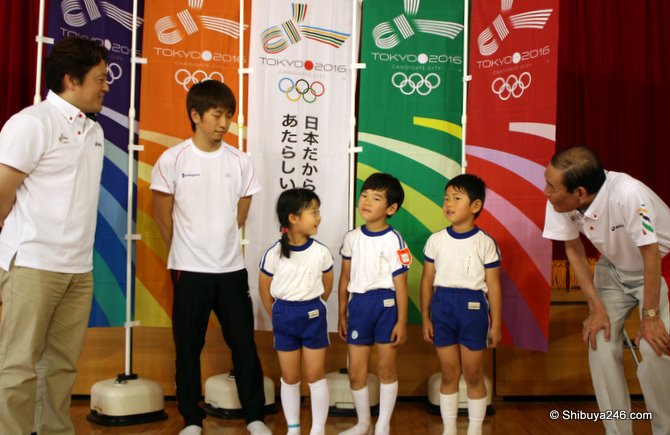 I was invited to an event held at the Fukuda kindergarten (福田幼稚園) in Hatagaya, Shibuya, over the weekend and attended with Shane Sakata from The Nihon Sun, a blog with great information on Japan travel.

The kindergarten was established in the year Showa 24 (昭和２４年) or 1949 and has a great history including at one time having its own farm (牧場) with cows where the kids could take a cup and get their daily fresh milk straight from the source.

It is hard to imagine today that cows might still be roaming around Shibuya ward.

The event at the kindergarten was to celebrate the participation of Tokyo as a bidding city for the 2016 Olympics.

Among those attending were Yoshinori Sakai, who was the torch bearer for the 1964 Olympic Games in Tokyo. At the time, Sakai-san was a 19 year old Waseda student. Having been born in Hiroshima on 6th August 1945 Sakai-san had experienced first hand the devastation caused by war, and then grew up during the rapid economic rebuilding period.

The event included a relay by the children, a trampoline performance by Yasuhiro Ueyama (2006 trampoline world champion), the planting of a tree, and speeches.

It was great to see the children being made a central part of the event. Although their were some official speeches made and Tokyo2016 was an important theme, the event revolved around the participation of the kids. If Tokyo wins its bid to hold the Games in 2016, these children will be in school playing a variety of sports and perhaps dreaming of one day themselves representing Japan at Olympic level.

The kids were patient during the speeches and seem to appreciate the message delivered by Sakai-san.

To the kids delight, Sakai-san handed them the official Olympic torch. They all took turns at holding it, and had some of the kindergarten staff looking on a bit worried as to what might happen if it broke.

The trampoline event was a highlight for the kids. They got to see some high jumps, back flips, and tumble turns on display before trying some small jumps themselves on the trampoline named “EuroTramp”.

Following the relay and trampoline, a tree was planted to mark the occasion. The kids loved the digging for the tree and were a bit disappointed that they didn’t have to make a bigger hole.

In the official interview after the events Sakai-san talked about his memories of the 1964 Games saying that all of Japan had come together to show the world how Japan had succeeded in its economic development, and to promote the message of peace.

The children stole the show talking about their enjoyment of the day and what type of athlete they would like to be in the future.

The Fukuda kindergarten was kind enough to give me some souvenirs of the trip, including a copy of their 50th anniversary guide book and a CD produced for the kindergarten with songs written by the Principal. Thank you.

I am sure these children will remember the day that the Olympics came to their local kindergarten in Hatagaya. If they are lucky, in 7 years time they may be sitting in a stadium in central Tokyo cheering for their nations athletes competing in the Tokyo2016 Olympic Games.

Tokyo2016 Information
The date to announce the successful bid city will be held by the IOC in Copenhagen, Denmark on 2 October 2009.

Here is a promotional video for the Tokyo2016 Games Bid.

Very nice photos and terrific write up! Looks like they were having fun.

Very nice. I hope Tokyo will get the Olympics 2016!

The 1964 Olympics gave Japan a chance to show the world what progress they had made in a short period of time. The so called "economic miracle of Japan" was on full display. With the world in difficult economic times, it may be interesting to see what sort of Olympic message they can show for the Games in 2016 if they are successful. 😉

The 1964 Olympics gave Japan a chance to show the world what progress they had made in a short period of time. The so called "economic miracle of Japan" was on full display. With the world in difficult economic times, it may be interesting to see what sort of Olympic message they can show for the Games in 2016 if they are successful. 🙂

A great bunch of photos. Hope Tokyo gets the bid, tnen the kids will really will have something to remember this time.
I think Dallas had a bid to host one of the olympics i don't think they got the bid though I'm not really sure. don't the japanese kids get summer vacation? cause right now it's summer vacation for them.
Only one thing was missing Rilakkuma,lol;) or did he want to stay home and relax? Bet he would have had fun with the kids.

Rilakkuma probably would have been trampled on by the relay teams. 🙂

Thanks. They did seem to really enjoy the day. It was hot and humid in the kindergarten grounds, but no-one was complaining.

Thanks. It sure was festive. The only thing we were missing was a BBQ. Trampoline guy did an excellent job. great to see this sort of thing up close. If Tokyo gets the 2016 Games I'll be going down to check out the trampoline events for sure.

Waaaaaaiiii! Sooooo cuuuuuute! (not pedo) Was wondering about the photos of little kids when I was checking your Flickr account yesterday 😀

Thanks. Appreciate the comment. The kids were very cute 🙂