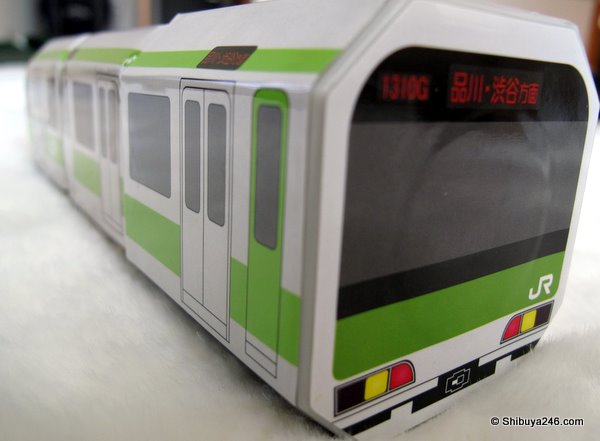 You don’t normally associate the Yamanote train line with green tea, but from April 20th, this year, Mokku company have been selling their unique product of bottled Green Tea in the shape of a train. There are versions for both the Yamanote line and Keihin-Tohoku line.

Since we are talking about the Yamanote line I thought you might be interested in some great facts about this main line train loop around Tokyo.

There are a total of 29 stations on the Yamanote Line that runs 34.5 kilometers around Tokyo. The line is so important in keeping the human resources of the city moving, that real estate prices can vary dramatically for properties in or outside the loop.

From wikipedia discussing the Yamanote line:

The Yamanote Line originated in 1885 with the construction of the Shinagawa line between Shinagawa and Akabane, bypassing the then built up areas and providing the first north-south rail link through Tokyo. The top part of the loop between Ikebukuro and Tabata was completed in 1903 (known as the Toshima line, 豊島線) and in 1909 following electrification both lines were merged to become the Yamanote Line.

Quiz
For those that have lived in Tokyo for some time and know the Yamanote line well, you might want to try the following quiz?

Please put your answers in the comments. Don’t assume the person above you has the right answers. I will post the correct answers next week.

Here is a short video I tried out with my Canon Powershot G10 camera. The video capabilities seem a bit limited with this camera as you can only take 640×480 resolution. All the latest cameras seem to have High Definition recording capabilities which I would like to take a closer look at.

What video cameras are you all using these days?

Update: I have now posted the answers to this quiz.

very interesting, sorry i can't answer any of the questions though, id like to try that drink some day.

no problem. the taste was pretty ordinary, but the shape was great. 😉

Those are all trick questions! Every one knows that Yama-no-tea! 😛

maybe that could be next if you are lucky

looks good :D. I really love green tea even on hot days I like it, which makes me stand out from my friends, they think I am weird for drinking green tea on a hot summer day, but I really don't like coke or all those other soft drinks, too much sugar for me.

Regarding the questions: I am not from Japan but Meitante Conan often narrates some interesting things about the yamanote line

1. Shin-Ōkubo and Mejiro do not connect with any other line

3. Karasumori Station was renamed Shimbashi Station, I think it had something to do with the extension of the Tōkaidō Main Line

4. I have no actuall numbers but my guess might be: 1. Shinjuku 2. Ikebukuro 3. Shibuya 4. Shinagawa must be something like that but don't take my word for it

5. I think it takes about 58 minutes to complete a loop

6. I think at peak hours there are like 50 trains running and if let say each train is about 200m long it comes down to about 10 km of total length and this would be somewhere between Gotanda and Meguro station

7. I think the oldest station is Shinagawa which I think was openend on June 12, 1872

and please bear with me if none of the above answers is correct. I have no idea, I just love watching conan 😀 and know I am going to enjoy some nice fried tofu and watch an episode of conan (^_^)

Conan to the rescue. I had forgotten about how educational that program was. The last time I saw Meitante Conan was when I was asked on a date and surprised to hear that was the movie we would be seeing. 🙂

What a way to promote the train line. I like the lipton green tea they sell in the states. I usually buy the 11/2 litre bottle for $1.50USD. On any given day it doesn't take long for me to finish it off. Does Rilakkuma like green tea also? What was the cost of that bottle? Wish i had one. I would like to go on the next conbini tour, if only i was there.

the conbini tour would be a hot item.

I was going to answer the quiz, but I'd only show myself up, so I'll leave that to the experts.. I like the idea of this novelty tea packaging – I get the feeling it'll shift pretty well..

thanks. next time we might make the questions a bit easier.

Great post and photos. I'm down in Okinawa, so, I'll pass on the quiz. We got a 2 car train down in the big city of Naha. I'll have to get down out of the mountains and give it a try someday!
Cool blog; I'll be back.

Thanks for dropping by. The next quiz will be a bit easier. I would like to get to Okinawa this summer. My last and only trip to Okinawa was for 12 hours. All I really saw was the airport.

My son would love some of those bottles, he's our version of the densha otoko.

There are some great train products if you like your densha. 🙂

You can definitely buy it at Odaiba in the gift store on the basement level, next to the convenience store. It is just off the food court where McDonalds and Cinnabon are. Also, you may find it in some Daily News JR convenience stores.

What a wonderful bottle. I suppose they don't export to the USA. I just got back home here from Japan. If I had know about these bottles I would have bought one there.

It's always the way 🙂 Maybe on your next trip

Great write up. I don’t remember seeing this bottle for sell. I guess it must be a Tokyo thing only.

Havent seen it anywhere else. They should make some with different regional lines on the bottle as well 🙂