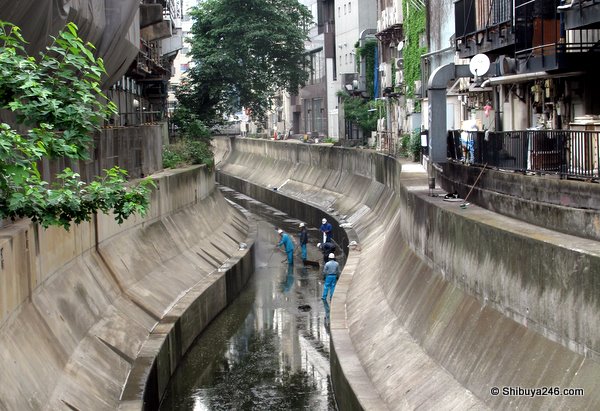 The river in Shibuya is not normally noticed as it has been largely built upon, concreted around and most importantly flushed with clean water to take away the once potent smell.

The origins of the the place name Shibuya have a number of tales, but one that is considered to carry some weight is that Shibuya was named after the iron-ore reddish river that flowed through it. The phrase “シブ色の川” shibu-iro no kawa, is the explanation for how the place became known as Shibu-ya （渋谷）.

Whatever the true origins of the name, there is no doubt that the Shibuya name has some connection with flowing water as can be seen the first character 渋. The second character means valley (谷). Shibuya station is located in a valley and when it rains with the river flowing under the station it can often cause flooding.

The river used to be seen quite easily but by building roads on top of it, concreting it to change its course and then in the 1930’s by Tokyu Department store being built over the top of it, the Shibuya river has largely disappeared from site.

It is worth noting that Tokyu Department store (East building) is one of the few department stores in Japan not to have a basement food area. This is because the Shibuya river flows under the store and station.

I came across this clean up crew today trying to keep the river in good condition.

You can see from the above photos the river looks like a man made watercourse. It used to be a natural flowing grassy river bed, but now has to settle for the concrete look.

Most of the water comes down from Shunjuku-Gyoen （新宿御苑） area and the river goes down beyond Ebisu (恵比寿) station towards Tengenji-bashi (天現寺橋) where the name changes to Furukawa and then flows further down out into Tokyo Bay.

Thanks to @socialpreneur for finding a great video on YouTube of a historical Japanese song, which is sung in schools, reflecting on the river that runs near Yoyogi Hachima in Shibuya-ku （渋谷区代々木５丁目を流れている川）

Thank you Twitter Followers
Thanks to @Shuttlecock, @shibuyarob and @tokyoasu for answering the quiz on Twitter about Tokyu Dept and the Shibuya River.

Really interesting! Lived here for 5 years and never even noticed the river! So sad how they laminate the rivers with concrete here. You should see the Tama River at Futako Tamagawa Station now. Ugh.

Thanks for the information and photos. While it's obvious that the Shibuya river is visible north and south of Shibuya station, it never occurred to me that its running UNDER the station is the reason that part of Tokyu has no basement! By coincidence, I was just downstream near Ebisu yesterday and took a photo of the river at that point. http://www.flickr.com/photos/topazu/3522178205/

Thanks topaz. I just checked out your photo stream on flickr. You have some great shots of Japan. http://www.flickr.com/photos/topazu/

Good article. Thank you. Although it is strange that rivers disappear under urbanist's solutions, there are many rivers which suffers the same faith. Good research like yours bring them back from memories and give them life again. Good definition in your photos too.

Thanks for the comment. It is a shame thaqt the river cant be seen, but it also adds some mystique to the place at the same time. It is good to see the old pictures of what the city looked like and to see the river in a more natural setting 🙂 Hope you come back and visit again.

Thanks Brad. It is amazing what's hiding under the roads and concrete blocks isn't it? I'll check out Tama River at the station some time.

interesting lessons, hopefully i can find the river when I visit..lol