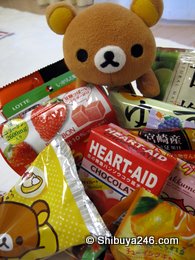 by Shibuya246April 27, 2009May 3, 20182 6456
Share0
I have written a number of posts about trips to the convenience store and talked about the regular change over of new products on the shelves providing marketing research for the manufacturers. After a number of requests for more news on what is going on in-store, I have decided to start a regular feature on “What’s going on at the convenience store”. It will cover new products as well as any interesting campaigns and other news from the stores.

I normally visit Lawson or Seven Eleven, but am also known to walk a bit further (an extra 200 meters) and find my local Mini-Stop or Family Mart. There are a few AM-PM’s around as well.

In providing a few more posts about Convenience Stores and their produce I thought it would be good to make a regular post on a Monday. Monday is normally a bit of a grind for those going to work or school and the news of latest treats from the Japanese convenience store might just give you the lift you need.

To kick off the first week of Conbini Monday, Rilakkuma makes an appearance to introduce 2 new ice-cream deserts.

The copy for this one says: A mild pudding taste with caramel sauce inside. The copy sounded better than the actual taste of it.

This ice bar is said to be strawberry pudding with white chocolate. Can you see the part in red at the bottom that says 果汁 （かじゅう） (Kajyu). This tells you the percentage of real fruits that are used in the product. The big 1% on this package probably lets you know that it could have tasted better.

You will probably see the 果汁 kanji on other food packages so look out for it when you are in the supermarket or convenience store.

Aww, 1% real fruit?!
Well at least the packaging is cute.

Thanks for the Kanji tip.

Thanks for the comments. Yes, 1% is not a lot of effort is it. The packaging hooked me, but the taste didn't deliver.