Many people who have been to Japan have heard about the capsule hotels where you have barely enough room to crawl into your space for a nights rest. The capsule hotel became popular during the bubble years when land was at a premium and quick easy accommodation was required for businessmen who were staying late at work.

Times have changed and capsule hotels are on the move. A company called “First Cabin” has just opened its first capsule hotel under the brand First Cabin (10 April 2009 in Osaka Minami).

According to their webpage at http://first-cabin.jp, the concept is:

Both a Japanese and English language website is available.

The overnight stay rate is set at Yen 4,800 for the first class cabin and YEN 3,800 for the business class version, with a 1 hour stay starting from YEN 800.

Television sets are said to be 32″ displays with full internet LAN capabilities. Separate lounge, counter check-in and shower facilities are available. Members can make reservations by mobile phone applications and once checked in open the key to their cabin with their mobile phone after having downloaded the application from within the hotel.

Having opened their first location in Osaka the company is looking to expand and is seeking investors. 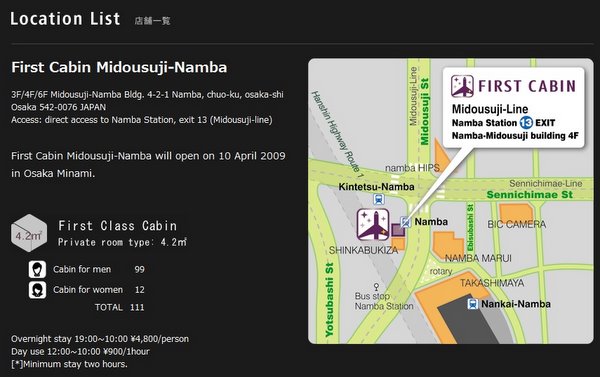 Very nice. I'm a big fan of capsule hotels, but this one is on a whole new level.

I'd totally stay there. Very flash. *For a capsule hotel, that is. What's next, boutique capsule hotels? Ha ha.

It looks good doesn't it? Maybe your right and couple capsules are next.

Thanks Nick. I might have to go try this out some time myself. Looks a lot better than the older style capsules.

I think I need to add "Stay at a Capsule Hotel" to the list of things to do when I visit Japan.

I always worried the capsules would be too claustrophobic, but these ones look pretty good. Worth a visit.

Wow! This looks so futuristic. Especially with the mobile cell phone "key", Completely new to me. I want to stay in one of these one day. I'm a big fan of hotels.

They certainly have done a good job of reworking the capsule concept with style haven't they? I'm waiting for someone to try it out in Osaka and let us know here how they went. Any takers ?

Fairly decent price, but no double cabins? What the hell? I guess they dont want it to turn into a cheap love hotel kind of thing?

No love capsules yet but that could be next!

http://tinyurl.com/da8gmz <-- will definitely give this a try later on ...

Thanks for dropping by. Those capsules look ok don’t they. When you are in the area might be worth checking out.