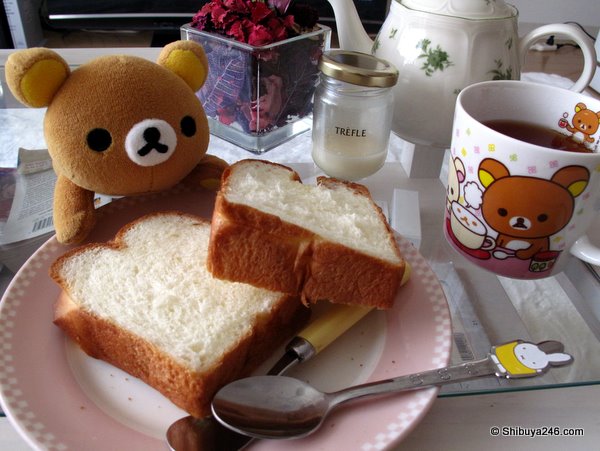 Having visited the Rilakkuma store at Tokyo Station yesterday, I couldn’t resist taking this photo this morning as I enjoyed some toast and honey with the new Rilakkuma collection.

I started to put some photos up on flickr from Rilakkuma and also joined a Rilakkuma Group on flickr as well. I will add more photos later.

I have also started a Rilakkuma & Friends group on flickr for people who are taking action shots of Rilakkuma out and about. The focus of photos should be of Rilakkuma doing something as opposed to photos of just his character. Of course Rilakkuma loves to relax so it can be a photo of him sitting around if you want. Photos like Rilakkuma lying on a Caribbean beach or sitting at a bar sipping a cocktail would be ideal !!

Here is the link. All Rilakkuma action fans are welcome to join.
http://www.flickr.com/groups/rilakkumafriends/

For those that don’t know, Rilakkuma was created 5 years ago and is known as the Relaxing Bear. Note, he is not lazy he just likes to stay relaxed and reduce his stress. He has quickly become a popular Japanese brand character and has appeared in TV commercials for Toyota, has done promotions for Lawson, KFC, Lotteria, Ito-en, Namco, has his own Rilakkuma cooking school and even has a Rilakkuma bus in Tachikawa and a Rilakkuma theme hotel room.

I bought my girlfriend the standard Rilakkuma pulshie from an anime convention last year. Kind of expensive, but worth every penny.

A very popular bear is Rilakkuma. When I visited the store in Tokyo Station it was packed out. I could barely move around the store. Business is definitely booming for Rilakkuma.

I like Rilakkuma, too! So you've been to the new shop at Tokyo station? I was planning to go to the one in Osaka when I was there, and I knew about the Tokyo one that lately opened, but not yet been there, either.
:S Do you live in somewhere near Shibuya? I live in Kawasaki, somewhere between Shibuya & Yokohama on Toyoko-line.

I'm a Japanese but I'm also always impressed with variety of shops, restaurants, and trends and how quick they are changing in Tokyo.

You have nice contents, similar interests with me, and I'd like to ex-links with your site, if you don't mind.
Would you let me know how you think about that?

Kirin, Thanks for stopping by and for your comments. I visited the Rilakkuma store on my way back from Sendai and it was packed. I plan to visit again on a week day (not at lunch-time) and hopefully it will be a bit quieter. I am going to post my photos I took off the store shortly, maybe today if I get time.

The trends in Tokyo change so quick, but it is fun to see things moving. I have lived in cities where change comes slow and whilst life is less rushed it can also get a bit stale. I like the fast change.

I would be happy to look at some links. I'll email you some ideas.

I loved your photos of Tokyo! I live in Rio, Brazil, and i hope one day I can go to Japan, visit Tokyo and Osaka!
So i love looking photos of Japan, just like yours! A flickrmatte has alredy told me that Osaka is the capital of Takoyaki! I've added you on flickr if you don't mind, so i can see your photos new you post news! 🙂

Thanks. I have added you back as a contact on flickr also. Hope you enjoy the new photos as they go up. 🙂 I am sure you will have a great time when you come to Japan.